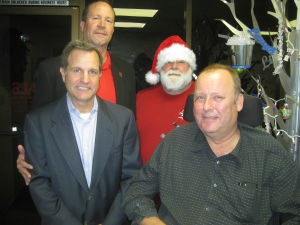 Negulescu was one of five scientists recently honored with a Warren Alpert Foundation prize. The Warren Alpert Foundation, in association with Harvard Medical School, annually honors scientists whose research work has improved the understanding, prevention, treatment or cure of human disease. Vertex said Negulescu was honored for transformative discoveries in the fields of genetics, physiology, pulmonology and pharmacology that led to the development of life-altering precision-targeted treatments for the devastating multi-organ disease cystic fibrosis (CF).

Negulescu, together with his longtime Vertex colleagues who contributed to the CF research, chose to donate the prize money to the ALS Association Greater San Diego Chapter in honor of their friend and colleague, Peter Grootenhuis, who is living with ALS, or amyotrophic lateral sclerosis, often called Lou Gehrig’s disease. Negulescu’s donation to the ALS Association represented the entirety of the prize money received.

“Our work in CF has been a team effort that began with support from patients and their families. Peter led the CF project for many years, and continues to make remarkable contributions as a leader, scientist, mentor and friend,” said Negulescu. “It seemed appropriate to donate the prize money to a worthy organization that is helping him and others.”

“At the ALS Association, we are dedicated to the three pillars of the mission, including research, advocacy and care services,” said Steve Becvar, executive director of the Greater San Diego Chapter. “Our local San Diego chapter has been growing its outreach and operations recently, now delivering services and equipment to approximately 50 percent more people living with ALS than we did just two years ago. This wonderful donation by Dr. Negulescu will help us to sustain this greater capacity for the foreseeable future. We are deeply honored and tremendously grateful for the extreme generosity of Dr. Negulescu in choosing to redirect his prize money to support our ALS patient community in this way.”

ALS is a progressive neurodegenerative disease that affects neurons, or nerve cells, in the brain and the spinal cord. Eventually, people with ALS lose the ability to initiate and control muscle movement, which usually leads to total paralysis and death within five years of diagnosis. There is no cure and no life-prolonging treatments for the disease.

The Warren Alpert Foundation was established in 1987 by Warren Alpert (1920-2007), a native of Chelsea, Mass., after learning about the development of a vaccine for hepatitis B. The inaugural recipient of the award was Kenneth Murray of the University of Edinburgh, who designed the hepatitis B vaccine. To award subsequent prizes, Alpert asked Daniel Tosteson (1925-2009), then dean of Harvard Medical School, to convene a panel of experts to identify scientists from around the world whose research had a direct impact on the treatment of disease. Each year the Warren Alpert Foundation receives between 30 and 50 nominations from scientific leaders worldwide.  Prize recipients are selected by the foundation’s scientific advisory board, which is composed of distinguished biomedical scientists and chaired by the dean of Harvard Medical School.

Vertex Pharmaceuticals is a global biotechnology company that invests in scientific innovation to create transformative medicines for people with serious and life-threatening diseases. In addition to clinical development programs in CF, Vertex has more than a dozen ongoing research programs focused on the underlying mechanisms of other serious diseases. Founded in 1989 in Cambridge, Mass., Vertex's headquarters is now located in Boston's Innovation District. Today, the company has research and development sites and commercial offices in the United States, Europe, Canada, Australia and Latin America. Vertex is consistently recognized as one of the industry's top places to work, including being named to Science magazine's Top Employers in the life sciences ranking for nine years in a row.

The ALS Association is the only national nonprofit organization fighting Lou Gehrig’s disease on every front. By leading the way in global research, providing assistance for people with ALS through a nationwide network of chapters, coordinating multidisciplinary care through certified clinical care centers and fostering government partnerships, The ALS Association builds hope and enhances quality of life while aggressively searching for new treatments and a cure.  For more information about The ALS Association, visit the website at www.alsa.org.