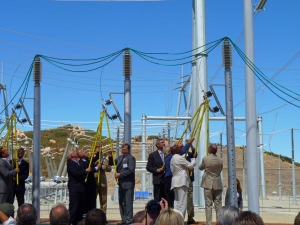 Outside, protesters object to Powerlink and more power projects planned for region

Atop a former mountaintop blasted away for the project’s construction, Governor Jerry Brown  and former Governor Arnold Schwarzenegger joined with energy industry executives to celebrate what they view as a milestone in meeting the state’s ambitious renewable energy goals.

Hailing Powerlink as a “great project”, Governor Brown acknowledged that “every step forward is met with resistance,” then quipped, “There’s more here than were protesting down the street.” 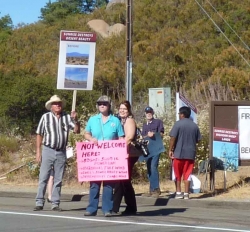 He referred to some two dozen protests who greeted party-goers at the Japatul freeway offramp ramp with signs showing environmental damage from Sunrise Powerlink and Ocotillo Express wind, which SDG&E has made power purchase agreements for in Ocotillo.  One woman shouted “Shame on you!” as vehicles carrying VIPs drove past.

Their issues ranged from fire safety to habitat destruction, to loss of Native American sacred sites and destroying the character of rural, mountain and desert communities.  The protesters came from across East County and as far away as Yuma, Arizona to voice their condemnation of the line.  (For details, see editorial,  The people our Governor wants to “crush.”) 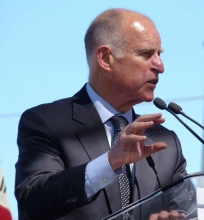 The Governor insisted that to move forward with such projects for the greater good of halting climate change. “You have to crush the opposition,” he declared, then blasted opponents as motivated by “inertia, inaction and fear.” He also cited the closure of San Onofre nuclear power plant as a compelling reason for Powerlink.

Niggli praised local officials supportive of Powerlink, naming off Assemblyman Brian Jones, Assemblyman Marty Block, and Imperial Valley Supervisors as well as labor union leaders.  He then introduced Debra Reed, Chief Executive Officer of Sempra Energy, parent company of SDG&E.  “She has made many improvements—especially in our stock prices,” he said.

That remark is sure to rub salt in the wounds for local fire survivors, many of whom remain unable to rebuild five years after wildfires that SDG&E lines caused. The utility has refused to compensate fire victims for their losses and has sought permission from state regulators to raise rates to cover its uninsured fire liabilities.  Critics have contended that shareholders, not ratepayers, should foot that bill. 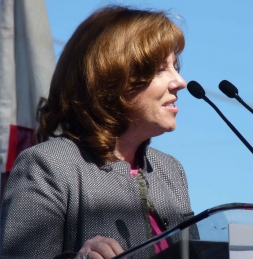 Reed praised the engineering team that “designed new types of engineering” to build Powerlink through rugged terrain.  A video set to upbeat music showed boulders being hoisted and removed, as well as an entire mountaintop being blasted away.  She said the line will ultimately carry 1,000 megawatts of renewable power, mainly large solar projects in poverty-stricken Imperial Valley, where the projects will also bring jobs.

Asked how many MW of renewable power the new Sunrise Powerlink is currently carrying, however, SDG&E spokesperson Jennifer Ramp said there are “800 megawatts from the east” and that “It’s all natural gas right now.”  She was unsure where exactly the gas-fired plants are located, but assured that all are on the U.S. side of the border.  Eventually the company hopes to replace the fossil fuel power with renewable energy sources, she said.

SDG&E’s CEO Jesse Knight claimed the project shows the corporation’s “Deep commitment to the environment,” citing over 300 mitigation requirements and efforts to avoid breeding seasons for golden eagles and bighorn sheep.  (He did not mention violations of no-fly zones around eagle nests documented on video by East County Magazine, which resulted in grounding and new training for pilots.) 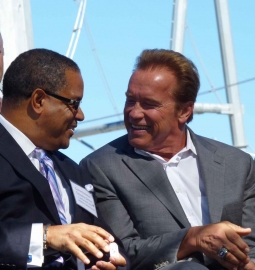 Former Governor Schwarzenegger, wearing cowboy boots with the state’s official seal, noted that “100,000 people are dying in the U.S. of pollution related illnesses. If the rest of the nation would have our energy efficiency, we could close 75% of coal-fired plants.”

Air pollution complaints have been filed over local “green” power projects regarding  massive amounts of dust raised in areas where asthma rates are far higher than the national average and where deadly Valley Fever spores lay beneath the desert’s crust, but this was not mentioned either.

Federal Energy Regulatory Commissioner John Norris praised the transmission of renewable energy from remote locations, but admitted that while engineers view the lines as “beautiful, most people don’t.”  While acknowledging impacts, he urged  “those who protect public lands to be vigilant about your cause, but be cautious about the cost,” citing global warming as a greater threat.

CPUC Commissioner Timothy Simon, who has drawn controversy for being wined and dined on SDG&E’s dime, praised Brown and Schwarzenegger.  “These two Governors have done more for climate change than any other leaders in the world,” he said.

John Kenna with the Bureau of Land Management laid out a vision for many more such projects fully supported by his boss, U.S. Secretary of the Interior Secretary Ken Salazar.  “We are all about a new energy frontier for America,” he said.  Altogether, 40 million acres of public lands in the U.s. have been identified as prime targets for industrial-scale wind and solar projects, a prospect Kenna apparently relishes. “It can happen,” he concluded.

Supervisors Ron Roberts hailed the event as a “historic day” and further, praised SDG&E for its contributions to fire safety.  (That remark came as a surprise to those aware that SDG&E caused 166 fires in just one five-year period, including two of the worst wildfires in San Diego history).  Roberts referred to several fires that SDG&E’s Sunbird helicopter helped fight (the helicopter will be leaving the area now that Powerlink construction is done) and some improvements to fire communications.

Imperial County Supervisor Gary Wyatt claimed these projects will bring thousands of jobs (never mind that a Pattern Energy executive was caught on camera admitted that Ocotillo Express wind will generate “just one” permanent local job).  Wyatt slammed the “endless droning of constant naysayers” and concluded with a smirk, “To those who opposed this project, `You’re welcome.’”

Joe Kennedy of Citizens Energy Corporation, son of Robert F. Kennedy and nephew of the late President John F. Kennedy, also spoke.  His company owns half the rights to the power from Powerlink in Imperial C ounty.  “We put half our profits into low income projects,” he said.  “San Diego is one of the most beautiful places,” Kennedy said, but added that  over the Laguna Mountains lies a “moonscape” that is Imperial Valley.  He noted that 30% of families there grow up in poverty and justified supporting big development projects to use proceeds to benefit the poor.

Over lunch, ECM asked a representative of Citizens Energy Corporation just how the company helps the poor.  The company buys home heating oil, a fossil fuel, and donates it to those who can’t afford to heat their homes.

The Governors joined together with energy executive leaders to flip switches and symbolically energize Sunrise Powerlink. (View a video of the celebrating.)

Conspicuously absent from the soiree were San Diego’s five Congressional members, Supervisor Jacob, and the leaders of our region’s 19 Native American tribes. 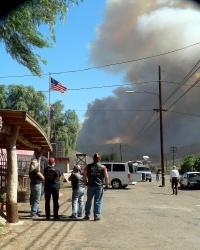 “Any policymaker attending this “celebration” needs to justify the line in the face of documented evidence warning of its extreme fire dangers. SDG&E brushes off concerns about fire safety by claiming that the utility has a fire plan,” Jacob said in a statement released to media.

She added, “This doesn’t change the fact that the project’s environmental documents concluded that fire dangers posed by the line are classified as the highest level possible and cannot be mitigated. The line traverses some of the most fire-prone terrain in the world. It will impede firefighting efforts from the air because firefighters cannot make water drops on energized lines. Public safety was a big reason why two CPUC judges recommended the line be rejected in 2008. Anyone who supports this line is likely contributing to the next major fire disaster in East County and beyond.”

Jacob further stated, “The sad truth is the project’s 11,000 page environmental document and two judges at the CPUC concluded that this $2 billion line was not needed to keep the region’s lights on now and in the future. “ Supervisor Jacob also attached a letter from CALFIRE describing the dangers of co-locating two 500kV lines parallel to each other, a warning ignored by the majority of CPUC commissioners who approved the line in 2008.  She also included a document describing fire behavior modeling of the Sunrise Powerlink in extreme wind conditions taken from the project’s environmental impact report. This modeling shows 1,382 residential parcels at risk from project.

Whether the Native American tribal leaders were invited or snubbed is not clear.  But many have voiced grave concerns about the onslaught of “renewable” projects that threaten to desecrate lands long held sacred and where their ancestors have been buried for thousands of years.  No doubt many would have been horrified to see the glorification of mountains being blown up with explosives, the epitome of man dominating nature.

“The thought that white men should rule over Nature and change its ways following his likening was never understood by the Red Man,” Chief White Cloud once concluded, summing up the religious views of Native American people. “Our belief is that the Great Spirit has created all things. Not just mankind, but all animals, all plants, all rocks... For us all, life is holy. But you do not understand our prayers when we address the sun, moon, and winds. ..we are able to live in harmony with all of nature. All of nature is within us, and we are part of all nature.”

As John and Ken hilariously noted yesterday, (KFI AM 640) the simultaneous presence of ex-Governor Clown Hair and (present) Governor Dementia probably represents the most formidable combination of gubernatorial incompetence and lunacy to ever unite in one place..

(And just imagine what that says about the voters who elected them.)
The "Powerlink"--a hideous marring of our beautiful backcountry--will do NOTHING; ZILCH, ZERO, NADO to reduce "greenhouse gases." And neither will the multiple and massive Obama-sponsored "wind farms," with turbines 500ft high, that will soon permanently obliterate hundreds of thousands of acres in our deserts and mountains.

What does political insanity look like when it's put in power. You don't need to look at the state, though few things could be more representive!

Just look around the county.