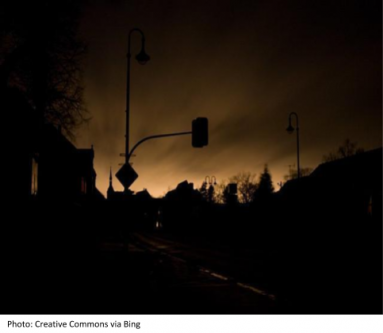 By Miriam Raftery
December 4, 2020 (San Diego’s East County) – As of Friday morning, 32,797 customers of San Diego Gas & Electric remain without power, two days after the utility shut off electricity to more than 73,000 customers. SDG&E implemented the widespread planned outages to prevent power lines from sparking fires amid a red flag warning due to dry conditions and gusty Santa Ana winds.

Hurricane Wind speeds of up to 94 miles per hour were measured at several SDG&E weather stations in East County and at National Weather Service stations.

SDG&E has said that it issued warnings of prolonged outages. The utility also set up community resource centers at libraries and community centers across the backcountry, offering water, snacks, and charging stations for residents in the outage areas.
The outages forced closure of all schools Friday in the Alpine Union, Dehesa, Valley Center-Pauma Unified and Warner Unified School District, as well as closure of Jamacha Elementary School in EL Cajon, Eucalyptus Hills And Lakeside Farms elementary schools in Lakeside. Students already struggling with the challenges of distance learning have now had to contend with studying in cold, dark homes without Internet access on computers due to the outages in many areas.
​While some East County readers were prepared for outages after repeated past power shutoffs, others without generators or backup battery-powered solar systems complain that the outages put their safety at risk, cost them money on spoiled food and lost work time with many working from home during the COVID-19 pandemic.  Residents also suffered stress, discomfort and inconvenience.
ECM publisher Mark Hanson in Lakeside says many of his neighbors didn’t realize the power outages would be continual, believing they would be brief or intermittent and were caught unprepared to go days without power. “Home Depot is sold out of generators,” he says. “Why can’t SDG&E turn the power back on while there are no high winds, so people working at home can get emails, turn on the heat to warm up their homes and pump water for their livestock?”
ECM asked readers on Facebook to share their experiences.
Rural resident Lisa Wood thought she had prepared by buying a generator, only to discover that her generator failed. “When the power goes out, the wells do not work.  When you have a bunch of horses on automatic waters, that is a problem…Getting water to my horses is literally life and death for the animals.” Fortunately she was able to get water from neighbors. She also endured the inconvenience of a “cold dark house and food thawing in the freezer.”
Cindi Spencer notes that the situation can be particularly hard on elderly people with Alzheimers and their caregivers. “My friend says his grandpa is having a hard time because he can’t watch his westerns.”
Elizabeth Leventhal suffered a health consequence after the outage and her parents incurred temporary lodging expenses. “I had to cancel a planned surgery,” she states.  “My elderly parents had to go to a hotel and it generally wreaked havoc on our lives…for no good reason.”
Susan Klein-Toth posted on her Facebook page,"Woke up to no power...I had to take a cold shower and I still can't stop shaking. It is 54ﾟ outside."
Although SDG&E has said it sent notifications to over 88,000 residents of possible prolonged outages, some residents in Deerhorn Valley/Jamul and Julian have told ECM they did not receive warnings of outages, or that messages on cell phones were truncated and not readable.
“Here in Lake Morena Village, some are saying they were notified of possible outages, but we are right in the village, and we got no such warning,” says Daniel Harrison.  “SDGE list on Wed. of possible outages did not mention our area. Our power was shut off at about 10:00pm Wed. night and we have been scrambling today to save our refrigerated goods. If power stays off several days, I don't know how we will save our freezer full of food.”
The shut-offs also caused problems for businesses. At the Petco store in Rancho San Diego, "all the staff had to spend the day driving all their animals to their other stores," the father of an employee says.
Some want to see SDG&E do more to avoid shut-offs, such as putting power lines underground in the most windy areas.
But others have chosen to take steps to protect their properties and families.
Greg Curran says, “I’ve lived in the mountain area of Jacumba Hot Springs for 20 years and every year, several times a year this happens and the same people year after year complain instead of doing some common sense remedial planning. Be prepared, you live in a high fire prone area…I say quit being the Victim and take responsibility. Be prepared.”
His advice? “Invest in a generator, SDG&E has a program for the purchase of generators. Get one. I am older, low income and yet I made it a priority; that if I love living in the backcountry I needed to adapt. I have solar, wind generator, batteries. It took me awhile to get to this point but I made it a priority. Folks, with climate change it's going to get worse before it gets better. Be prepared.”
That said, he is skeptical of SDG&E’s rationale for the frequent shut-offs. “The problem I have is I pay for a service to be provided all the time and SDG$E does not really shut the power down to "Protect the citizens" but to cover their butts from being sued because they were too cheap to make the lines safe. And from what I can see they are starting to really abuse that on/off switch. That, we have a right to complain about.
”
Kim Hamilton lives in the Deerhorn Valley area south of Jamul. Here’s how she kept the lights on. 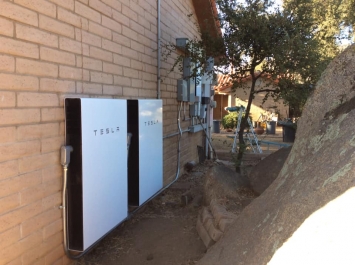 “The state of California will pay close to 100% of the cost of storage batteries and installation. That’s over $26,000.” To qualify, she says, ”You have to live in a high fire risk areas and be dependent on an electric powered pump for water. It’s a rebate, so it’s pay up front, get a short term loan, or find an installer who will front the expenses for a fee.” Learn more about the Equity Resiliency Program at https://www.cpuc.ca.gov/.../SGIP_residential_web_043020.pdf
How well did it work when the power went off this week?  “So ours kicked in without a hitch. No generator... seamless switch to batteries when grid went down last night. We connected it to our existing solar, so it’s charging every day, when the sun is out.”  (photo, right)
She adds, “These PSPS (public safety power shutoffs) for multiple days are going to increase. At the very least you need a generator you know how to use. But there are other options, too.”
But some can't afford such comforts. " There are many reasons a generator is unaffordable for so many," says Loralei Von Bretton in Julian. "While counting your blessings if you are able to afford a generator, please also know not everyone is in the same position."
ECM reached out to SDG&E’s media line regarding residents’ concerns, but have not received a response as of press deadline for this article.

Those dependent on water wells should consider using solar panels to power a specialized solar submersible pump that can be used all year including when the power is out. Solar panel costs are reasonable and a small 110 volt generator can be used for backup. Sometimes the pump can be placed next to an existing regular powered pump or used to replace the existing pump.

I have a small generator that will power my fridge and a few lights but keeping fresh gasoline is a problem. Also have a larger generator that is real loud and uses more gas.

The costs can be payed by upper income people, the poor are just out of luck.

And there hasn't been a big earthquake for a long time, I go to the USGS website often.