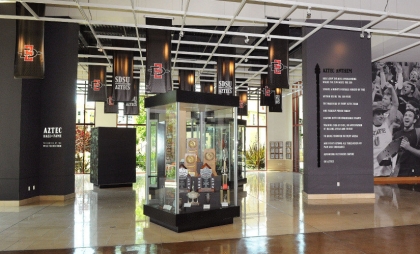 October 17, 2016 (San Diego) - San Diego State Athletics will honor the 2016 Aztec Hall of Fame class on Friday, Oct. 21, at the Payne Parma Goodall Alumni Center on the SDSU campus. The festivities will commence with a reception at noon, followed by the official induction program at 1 p.m.


In addition, the new class will be recognized later that evening on the field at halftime of the Aztecs’ home football game against San José State, which kicks off at 7:30 p.m. Game tickets for the SDSU’s showdown with the Spartans are available through the Aztec Ticket Office at (619) 283-7378 or at GoAztecs.com.

The Aztec Hall of Fame inducted its first members in 1988, and welcomed a new group of legends every year through 1999. Inductions were put on hiatus for two years while work was completed on the Aztec Athletics Center (now Fowler Athletics Center), which is the first permanent home of the Hall of Fame, before resuming in 2002. Not including this year’s class, 138 individuals and six teams have been enshrined since its inception.

For more information about the Aztec Hall of Fame induction ceremony, please contact the Aztec Club at (619) 594-6444.

The following is a quick glance at the newest class of the Aztec Hall of Fame:

Started 69 of the 70 games he played in ... Finished his career with 64 straight starts... Led SDSU to the 2010 MWC Tournament title, 2011 MWC regular-season title and 2011 MWC Tournament title… Helped the Aztecs to the 2010 NCAA Tournament First Round and 2011 NCAA Tournament Sweet 16… Led SDSU to its first NCAA Tournament win in school history in 2011… 2011 All-American (Wooden Award, second team by AP, Sporting News, FOXSports.com, third team by State Farm Coaches and SI.com) …Logged 40 career double-doubles, which is the second most in school history behind Michael Cage’s 61... Tied Andrew Bogut for the most career double-doubles in MWC history... Set the MWC all-time mark for career double-doubles in MWC games (21) and double-doubles in a single season in MWC games (12)... Posted 56 career double-figure scoring games and 42 career double-figure rebounding efforts (nine with 15+)... Led the team in scoring 27 times, rebounding 43 times and assists 16 times... Scored at least 20 points 12 times in his career... In 2010: MWC tournament MVP and first-team selection... The only freshman in MWC history to earn first-team all-conference honors... MWC freshman of the year ... Sporting News All-Freshman second team... NABC All-District 17 pick... Only freshman in the 11-year history of the MWC to earn conference player of the week accolades three times... One of only four freshmen in NCAA Div. I to lead his team in scoring and rebounding... In 2011: Voted to the All-MWC first team, All-MWC tournament team, All-MWC defensive team, NABC All-District 17 team and USBWA All-District IX team... Was one of 10 candidates for Naismith Award and one of 20 candidates for Wooden Award... Was a two-time MWC Player of the Week... Voted the CBE Classic Oxford Subregional MVP... Ended the campaign with 23 double-doubles, the fourth most in America ... SDSU Division I career rankings at time of departure: second in rebound average, fifth in rebounds, seventh in consecutive games started, 14th in field-goal attempts, 16th in scoring average, 16th in games started, 18th in blocks, 19th in points, 20th in field goals and 20th in steals… Won NBA Championship with San Antonio Spurs… Two-time NBA Defensive Player of the Year (2014-15, 2015-16) and named NBA Finals MVP (2013-14) … Runner-up for NBA MVP (2015-16).

Named a first-team All-America punter in 1996 by Associated Press and the Football Writers Association of America…A second-team All-American as a junior…Also an all-WAC selection…SDSU special teams MVP…Played in the Blue-Gray Game following his senior season … Holds the school record for punting average in a season (46.5) and in a career (44.7) … Also the record holder for the longest punt in school history (82 yards in 1996 vs. New Mexico).