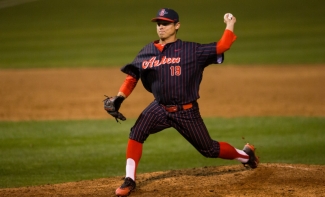 April 7, 2018 (Colorado Springs, Colo.) - The San Diego State baseball team suffered a 2-0 loss in its doubleheader opener at Air Force on Saturday afternoon. The Aztecs fall to 20-10 overall and 7-5 in the Mountain West.

SDSU was shutout for the first time in the 2018 season. SDSU accumulated just five hits in the contest and were hindered in scoring opportunities by going 0-for-4 with runners in scoring position and 1-for-8 with runners on base.

Garrett Hill suffered his first loss of the season in tough-luck fashion, allowing just two runs over 6.2 innings of work while striking out five and walking one.

All the offense the Falcons mustered came in the second and third, with a Nic Ready solo home run in the second inning and a Colby Brown RBI single in the third.

SDSU had a run-scoring opportunity in the ninth, with a Jordan Verdon one-out single and a Julian Escobedo two-out walk creating a two-man-on situation. Air Force's Ryan Holloway halted SDSU's comeback attempt, logging his first save of the year after forcing Sean Ross to groundout to shortstop to end the game.

Following today's doubleheader, the Aztecs conclude its three-game series with the Falcons tomorrow at noon.