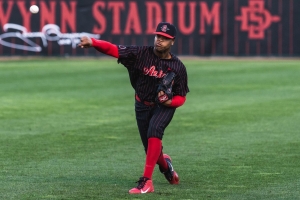 After starter Harrison Pyatt was replaced due to injury after a pair of batters, Jacob Flores performed impressively in his short-notice appearance, logging a career-high four innings while allowing just two hits with two walks and a career-high five strikeouts.

Trailing 2-0 heading to the bottom of the third, the Aztecs claimed the lead with a 2-RBI double by Casey Schmitt down the left field line, scoring both Angelo Armenta and Mike Jarvis. An inning later, Jarvis posted an RBI double of his own before Jaden Fein made it three consecutive innings with an Aztec run after launching his team-leading fourth home run of the season in the bottom of the fifth to make it a 5-2 lead.

Fein's home run proved to be an important insurance run, as the Falcons clipped the lead to 5-4 with a solo home run in the ninth.

Schmitt recorded his fifth save of the year, allowing just one hit and one run while striking out a pair. Christian Winston also shined out of the bullpen, surrendering just one hit in 1.2 shutout innings of work.