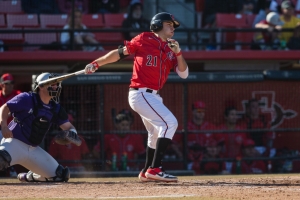 Aztec pitching held the Toreros to a modest night throughout, as Aaron Eden allowed one run over the game's first two innings before handing the game over to the SDSU bullpen, which combined for seven innings with one run and six hits allowed.

SDSU opened the scoring with Brian Leonhardt's first career home run in the top of the second, as the freshman took a 3-1 fastball over the wall in right-center field.  USD made the lead shortlived, however, scoring a run in the bottom half of the second before taking a 2-1 lead in the third.

SDSU tied the game in the fourth with Angelo Armenta crossing home on a wild pitch after hitting a one-out single earlier in the inning.

The Aztecs took the lead on a Chad Bible infield single that was kicked around by the Torero middle infield. The defensive lapse allowed both Julian Escobedo and Casey Schmitt to score for a 4-2 Aztec lead.

The Toreros put the game-tying run on base in the eighth, but immediately upon entering the game from the bullpen, Justin Goossen-Brown needed just one pitch to force an inning-ending flyout against Adam Kerner to strand a pair of runners.

Adrian Mardueno improved to 5-1 on the year, throwing 2.1 innings of shutout relief with four hits allowed. Casey Schmitt earned his sixth save of the year, working around a leadoff walk by forcing a 4-3 double play and a strikeout of Torero pinch hitter Kevin Collard.

In addition to his second-inning solo home run, Leonhardt also impressed on the mound, allowing just two hits and one run over 3.1 innings of work.  Leonhardt recorded three strikeouts on the night and retired 10 of the 12 batters he faced.

Bible and Escobedo led the lineup with both going 2-for-4 at the plate.

San Diego State jumps back into Mountain West play this weekend, traveling to UNLV for a three-game series starting on Friday at 6:00 p.m.