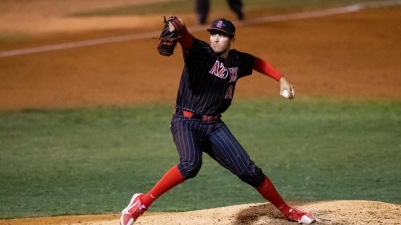 May 8, 2022 (San Diego) - Behind starting pitcher T.J. Fondtain’s complete-game shutout, San Diego State shook off Friday’s disappointing loss with a big 12-0 conquest of Air Force in the second game of its Mountain West series on Saturday at Tony Gwynn Stadium.

Fondtain (2-6) snapped an eight-start drought without a victory, yielding just four hits without a walk while posting seven strikeouts, as the Aztecs (15-34, 6-17 MW) blanked the Falcons for the first time since an 11-0 whitewash on April 14, 2013, at the Academy.

Not to be outdone, Fondtain helped his own cause with a 3-for-5 effort at the plate, notching two doubles, an RBI and a run scored to help the Scarlet and Black creep to within four games of Air Force (23-24, 11-12 MW) and Fresno State (23-24, 11-12), both which are tied for the fourth and final spot in the Mountain West tournament.

With his performance, Fondtain tossed SDSU’s first complete-game shutout since Justin Goossen-Brown accomplished the feat in an 8-0 thrashing of New Mexico at home on May 16, 2019. Last month, Troy Melton also pitched a complete game in the Aztecs 2-1 nail-biter over Grand Canyon on April 22.

A native of Clovis, California, Fondtain was masterful on Saturday, retiring the side in order in five of nine innings and reached ball three in the pitching count just twice in the contest. The SDSU left-hander allowed just two batters to reach second after doubles by Jay Thomason and Sam Kulasingam in the eighth and ninth, respectively.

In addition, to Fondtain’s heroics, the Aztecs received three hits and three RBIs apiece from Cole Carrigg and Brian Leonhardt, while Caden Miller went 2-for-4, highlighted by a two-run triple in the bottom of the eighth that closed out the scoring.

Elsewhere, Poncho Ruiz scored three runs, while Tyler Glowacki crossed the plated on two occasions, adding two hits, including an RBI single in the fourth that gave SDSU a 4-0 advantage.

The Aztecs’ clutch hitting was on display in the fifth and sixth innings, when the Scarlet and Black broke the game open with three tallies in each frame with two outs.

In the fifth, Leonhardt supplied the key hit with a two-run double to left center on an 0-2 pitch and promptly scored when Fondtain followed with a two-bagger of his own.

Meanwhile, Carrigg kept the inning alive by reaching on an infield single, as Miller alertly raced home from second on the play just behind Glowacki. Moments later, Leonhardt stepped up and doubled home Ruiz to provide the host school an insurmountable 10-0 lead.

Falcon starter Doyle Gehring (2-3) was saddled with the loss after allowing seven runs (four earned) on nine hits and a pair of wild pitches against three strikeouts in 4 2/3 innings. However, Seungmin Shim did not fare any better, surrendering three runs on three in 1 1/3 innings before giving way to Chase Spencer and Stevan Fairburn, respectively.

San Diego State will be aiming to secure its third straight MW series victory today when it battles Air Force in the weekend’s rubber game, starting at 1 p.m.