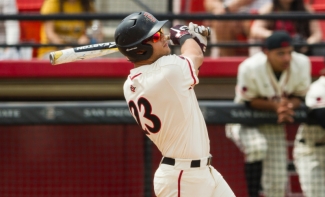 April 22, 2018 (San Diego) - The San Diego State baseball team clinched a series win over Fresno State on Sunday while posting the first shutout of the 2018 season, defeating the Bulldogs, 7-0, at Tony Gwynn Stadium Sunday afternoon. SDSU improves to 26-14 and 10-7 in the Mountain West to own sole possession of second place in the league, while fifth-place standing Fresno State drops to 23-16 overall and 9-12 in MW play.

Making his second start of the week, SDSU right-handed pitcher Jorge Fernandez recorded a dominant performance against the Bulldogs, pitching six shutout innings with only four hits allowed while striking out seven and not surrendering a walk.

Fernandez started off his outing on the right foot, retiring each of the first nine batters he faced before allowing a leadoff double to start the fourth. Fernandez's only jam of the afternoon came in the sixth inning, where the senior worked around a pair of Fresno State hits to leave a pair of Bulldog runners stranded in scoring position after forcing Jeremiah Hill to hit a weak ground ball back to the mound for a 1-3 groundout to end the threat and preserve SDSU's 2-0 lead.

The Aztecs built that 2-0 lead with Jordan Verdon's sixth home run of the year -- a solo shot in the fourth inning -- and a Chase Calabuig RBI single in the fifth inning.

SDSU scored for the third consecutive inning in the sixth, as a no-doubt three-run home run by Chad Bible cleared the wall in left field by a hefty distance to extend SDSU's lead to 5-0. Bible's home run was his seventh of the year, good for the most on the team.

The Aztecs added a pair of insurance runs in the seventh, scoring in the fourth consecutive inning, after a high-chopping ground ball by Dean Nevarez found its way through the infield to plate both David Hensley and Matt Rudick.

After Fernandez's impressive six innings on the mound, Jacob Erickson and Ray Lambert picked up right where Fernandez left off, holding Fresno State hitless for the last three innings of the game. Erickson allowed just one base runner over the seventh and eighth innings while striking out a pair and Lambert posted a 1-2-3 ninth inning to seal SDSU's series win and first shutout of the season.

At the plate, Hensley led the Aztecs with three hits in a 3-for-4 showing at the plate, while Rudick and Bible each posted two hits apiece. Bible and Nevarez combined for five of SDSU's seven RBIs in the game, driving in three and two runs, respectively.

UP NEXT
After wrapping up an eight-game homestand on Sunday, SDSU makes a midweek trip to UC Riverside (15-19, 4-5 Big West) for a 6:00 p.m. contest on Tuesday. The Aztecs will host third-place standing UNLV (29-14, 10-8 MW) for a pivotal Mountain West series next weekend starting on Friday at 6:00 p.m.
Box