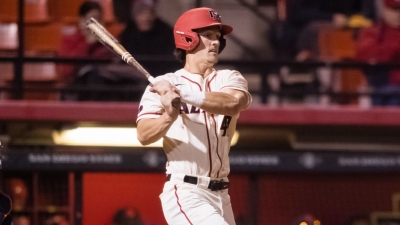 After the Aztec staff was victimized by a combined 17 runs and 25 hits in the first two games of the series, the trio of starter Troy Melton and relievers Christian Winston and Avery Jones came up huge, limiting the Beavers to just four hits to help the Scarlet and Black complete its first shutout of the 2020 campaign.

Bolstered by a season-high nine strikeouts, Melton (3-0) registered his third straight victory in as many starts, yielding four hits and one walk in 6.0 innings, while Winston (2.0 IP,  3 SO) and Jones (1.0 IP, 2 SO) held OSU hitless for the remainder of the contest, giving up two walks apiece.

SDSU (7-4) opened the scoring with three markers in the bottom of the third when Jacob Cruce touched home on Brian Leonhardt’s sacrifice fly to center, while Matt Rudick delivered a two-run single with two outs, plating Wyatt Hendrie and Jaden Fein.

Previously, Cruce singled to right with one out and advanced on a failed pickoff attempt by Beaver starter Nathan Burns, while Hendrie drew a walk and Fein cracked a base hit to left. After Leonhardt’s sacrifice fly, Mike Jarvis reached on an infield single, while Rudick soon followed with his clutch hit on a 2-2 pitch.

With two outs in the third, the Aztecs increased their lead to 4-0 when Cruce went deep to straight-away center on an 0-1 pitch for his first home run in a Scarlet and Black uniform.

SDSU added two more runs in the fourth when Casey Schmitt drove in Leonhardt with a single to left, while Jarvis scored after Ryan Orr reached on a fielder’s choice. Earlier, Leonhardt bunted for a base hit, while Jarvis got aboard on an infield single before Rudick drew a walk to load the bases.

Oregon State (5-5) advanced a runner to third base with two outs in each of the first two innings, but Melton avoided disaster after Troy Claunch struck out swinging in the first, while namesake Jacob Melton was caught looking in the second.

The Beavers also threatened in the final two innings after drawing a pair of walks in each frame. However, Winston retired Claunch on a called third strike in the eighth, while Jones later duplicated the feat against Matthew Gretler to preserve the whitewash.

Burns (0-1) absorbed the loss for OSU after ceding five runs on six hits and one walk in 3 1/3 innings, while Kyler MacMahan totaled three of the Beavers’ four hits.

San Diego State will look to even the series on Sunday when the two teams square off in the weekend finale, starting at 1 p.m. The contest will be streamed live on GoAztecs.com via the Mountain West Network. In addition, the first 300 fans in attendance will receive a free Stephen Strasburg T-shirt.