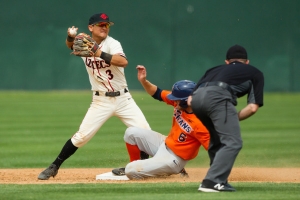 SDSU scored in each of the game's first three frames and jumped out to a 2-0 lead after Chase Calabuig doubled home a pair of runs, scoring David Hensley and Matt Rudick in the first.

In the second, SDSU added a run on a Jacob Maekawa on an RBI single before breaking things open in the third with a six-run, four-hit showing. Each of the first seven batters in the inning reached base, beginning with David Hensley's third home run of the season. Julian Escobedo drew a bases-loaded walk and Chad Bible smacked a 2-RBI opposite-field double off the wall in right-center to extend SDSU's lead to 7-2. The Aztecs capped the third-inning with a Casey Schmitt RBI single and a Maekawa sacrifice fly, extending the lead to 9-2.
The Titans showed signs of a potential comeback in the top of the fifth after scoring a run on a two-out bases-loaded walk to make the score 9-6. However, with the tying run on base, Christian Winston stranded the bases loaded after inducing a 4-6 put out on a fielder's choice against CSF's Chris Prescott.
That proved to be more than enough offense for SDSU, as the Aztecs were held scoreless for the game's final six innings. The freshman duo of Winston and Schmitt kept CSF scoreless for the game's final four innings, as they collectively posted 4.1 innings of relief with no runs and four hits allowed. Winston earned his first collegiate win, while Schmitt recorded his third save of the season.
Six different Aztecs recorded a multi-hit performance as SDSU posted 15 hits collectively. Calabuig and Maekawa each recorded performances with two hits and two RBIs each.

UP NEXT
SDSU will play its fifth consecutive non-conference game on Tuesday, hosting CSUN for a 6:00 p.m. contest.
Box