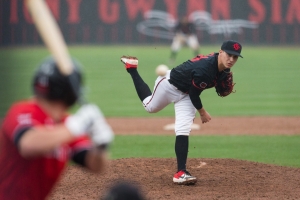 March 16, 2019 (San Diego) - The San Diego State baseball team won its third straight game after the Aztecs defeated Seattle, 12-8, at Tony Gwynn Stadium on Saturday night. The Aztecs improve to 10-7 on the year and have won five of their last six, while the Redhawks fall to 4-14.

The Redhawks jumped out to a 3-0 lead after a pair of runs in the second and a run in the third, but the Aztecs responded with a five-run third inning featuring a two-RBI single by Angelo Armenta and a go-ahead one-out single by Brian Leonhardt.

After SDSU's five-run third, Seattle immediately responded with a four-run fourth to reclaim a 7-5 lead. Matt Rudick drove in a run in the top of the fourth on a 4-3 ground out, and in the fifth with two outs, Joe Fitzhugh hit a bases-clearing 3-RBI double down the left field line to give SDSU a 9-7 lead.

The Aztecs scored for the fourth consecutive frame in the sixth, using another 2-RBI single by Leonhardt to plate both Armenta and Rudick. Leonhardt later capped his impressive night with an eighth-inning RBI single to bring the score to its final 12-8.

Michael Paredes earned his first career win, firing 4.1 innings of relief with his lone blemish being a seventh-inning solo home run by Seattle's Austin Lively. Paredes struck out more than half of the batters he faced, finishing with eight punchouts while scattering just two hits without allowing a walk.

SDSU will go for a three-game sweep of Seattle tomorrow at 1:00 p.m.