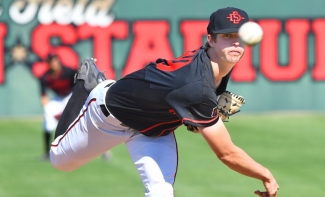 February 18, 2018 (San Diego) - The San Diego State baseball team completed a three-game sweep of UC Santa Barbara in its first series of the 2018 campaign by defeating the Gauchos, 7-5, at Tony Gwynn Stadium on Sunday afternoon.

Garrett Hill impressed in his SDSU debut, earning the win with a five-inning performance. Hill started his outing in commanding fashion, needing to face just the minimum through his first 11 batters.

Hill was quick to receive run support, with Chase Calabuig hitting his second home run in as many days in the top of the first for a 1-0 SDSU lead.

SDSU grew that lead to 4-0 over the course of the second and third innings, with Casey Schmitt hitting an RBI single to score Chad Bible and Matt Rudick hitting a 2-RBI single through the right side of the infield to score Calabuig and Dean Nevarez.

The Gauchos were quick to cut into that lead, however, with a pair of runs in the fourth and an additional run in the sixth. The Aztecs had a response of their own response in the bottom half of the sixth, with David Hensley recording a hard-hit double into the left-centerfield gap to score Julian Escobedo. The Aztecs later added an insurance run in the seventh, with Nevarez crossing the plate on a Casey Schmitt groundout.

With SDSU holding a 7-3 lead, the Gauchos would not go down without a fight, scoring a pair of runs in the top of the eighth. Justin Goossen-Brown came in to halt any opportunity of a late-inning comeback, stranding an inherited runner in the eighth inning.

Goossen-Brown came back out to pitch the ninth and after retiring each of the first two batters, UCSB showed signs of life with leadoff man Tommy Jew reaching on an infield single. Goossen-Brown recorded the four-out save, however, clinching SDSU’s Sunday afternoon win by inducing a game-ending lineout to Hensley at shortstop.

San Diego State hosts San Diego for a midweek contest at Tony Gwynn Stadium at 6:00 p.m. on Tuesday. The game will be aired live on the Mountain West Network.