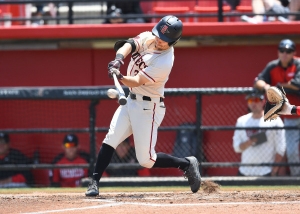 Jorge Fernandez, who entered his start on Sunday with a streak of 10 consecutive scoreless innings, picked up right where he had left off last week, holding UNLV scoreless for the first five innings of the game. After Fernandez allowed a leadoff single to start the game, the right-hander struck out each of UNLV's next five batters and did not allow a hit to each of the next eight hitters he faced.

The Aztecs broke a scoreless tie in the bottom of the fourth, as Chase Calabuig kickstarted the rally with a leadoff walk and a stolen base in the ensuing at bat. Jordan Verdon drove home Calabuig with a hard-hit single through the middle of the infield before Julian Escobedo and Chad Bible both hit RBI doubles to finish off SDSU's three-run fourth inning.

Fernandez ran into his first jam in the sixth as a leadoff walk and a one-out single gave the Rebels a pair of runners on early in the frame. Adrian Mardueno took over on the mound after Fernandez loaded the bases with his second walk of the game and allowed a pair of runners to score on an RBI single by Max Smith and a groundout to third base by Nick Ames.

However, Mardueno limited the damage in the sixth inning, striking out Jack-Thomas Wold with a pair of runners in scoring position to prevent the potential tying and go-ahead runs from scoring.

Aside from the pair of inherited runners scored, the SDSU bullpen was close to perfect, with Mardueno posting 1.2 innings of one-hit relief while Casey Schmitt allowed just one hit over the eighth and ninth innings to earn his seventh save of the season.

SDSU hosts UC Riverside on Tuesday at 6:00 p.m. Logan Boyer, who began the season as SDSU's Friday night starter, makes his return from an injury suffered on February 23rd in his third start of the season.