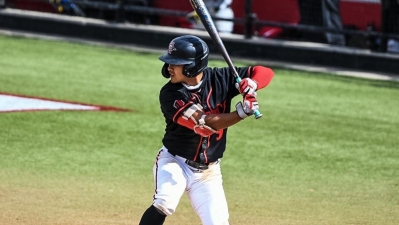 With the shutout, the Aztecs logged their third run-rule victory of the year, improving to 16-6 overall and 11-4 in Mountain West. In addition, SDSU extended its winning streak to four, maintaining a two-game lead over second-place UNLV in the conference race.

Not to be outdone, the Aztecs notched their seventh straight series victory to open the season and completed their first sweep of the year. The Scarlet and Black also recorded its first three-game sweep of the Lobos since April 5-7, 2007, in San Diego.

SDSU was buoyed by the 1-2 punch of Mike Jarvis and Matt Rudick, who combined for five hits, seven RBIs and seven runs scored at the top of the order. Jarvis (two hits) set a career-high with four runs, while Rudick (three hits) tied his collegiate-best with five RBIs.

SDSU battered Lobo starter Tristin Lively (2-2) with six runs in the first two innings. After Jarvis led off with solo home run in the first, the Aztecs put up a five-spot in the second, highlighted by Fein’s two-run single with two outs.

Previously, San Diego State loaded the bases following a Pyatt single and consecutive walks to Caden Miller and Jarvis. Moments later, Rudick was hit by a pitch, Wyatt Hendrie drew a walk, while Leonhardt knocked in Pyatt with an RBI groundout.

The Aztecs plated four unearned runs in the third, capitalizing on a passed ball and a throwing error to extend their commanding lead to 10-0.  Leonhardt delivered the key hit in the inning with a two-run single to center with two outs.

SDSU continued to pour it on in the fourth when Rudick smacked a three-run homer to right, which plated Miller and Pyatt. Earlier, the Aztecs loaded the bases on walks to Ryan Orr and Miller sandwiched around a Pyatt single. Orr subsequently raced home on Jarvis’ grounder to third, setting the stage for Rudick’s blast.

The Aztecs closed out the scoring in the sixth when Jarvis tripled to center and later touched the plate on Rudick’s chopper to first.

The Lobos (8-14, 6-9 MW) advanced just one runner to third past the first inning, as SDSU turned three double plays on the afternoon.

In the seventh, UNM’s Jarrett Gonzales drew a one-out walk and advanced on a wild pitch before moving to third on a tapper to the mound. However, Sauer induced a flyout to preserve the shutout.

Mack Chambers was the sole Lobo to record two hits, while the visitors utilized four relievers after Lively’s exit with one out in the second. Aaron Makil and Chezzare Gonzales combined to give up eight runs (four earned) on seven hits and fours walks with just one strikeout in 2 1/3 innings.

San Diego State returns to the diamond next weekend when it plays host to Nevada in a three-game series April 10-11 at Tony Gwynn Stadium.