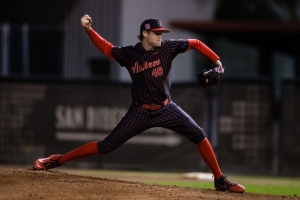 Aztecs have won five of their last six against the Titans

April 13, 2019 (Fullerton) - Now winners of four in a row and six of their last eight, the San Diego State baseball team defeated Cal State Fullerton, 6-1, at Goodwin Field on Friday night. The Aztecs earn their 20th win of the season and improve to 20-14, while the Titans fall to 14-16.

Three of SDSU's six runs came via a home run, as Jaden Fein hit a solo homer to lead off the second inning and Julian Escobedo hit a two-run shot in the fifth. Both homers marked as Fein and Escobedo's third of the season.

On the mound, Justin Goossen-Brown posted six shutout innings with only three hits allowed while walking two and striking out four. After allowing a leadoff single in the third, Goossen-Brown faced retired each of the next nine batters and faced the minimum over his next 12 batters faced, allowing just one hit by pitch over that run.

Fresh off his Collegiate Baseball National Player of the Week honors, Adrian Mardueno came into the game in the sixth inning with a two-man-on, no-out situation. Mardueno proceeded to strikeout each of the next two batters he faced before allowing a walk to load the bases. The walk proved to be harmless, however, as Mardueno finished the inning with a strikeout of Fullerton's Zach Weller to strand both of his inherited runners.

Brian Leonhardt opened the scoring with an RBI single in the top of the first and in the next inning, Fein hit his third home run of the season to extend the lead to 2-0.

Jacob Flores shined in relief for the Aztecs, striking out four in 1.2 shutout innings with only one hit allowed.

Goossen-Brown earned the win to improve to 5-1 on the year, while Cal State Fullerton's Tanner Bibee fell to 4-5 on the year after allowing four runs on five hits in five innings pitched.

San Diego State looks to clinch a series win tomorrow night at Goodwin Field with first pitch between the Aztecs and Titans scheduled for 6:00 p.m. RHP Harrison Pyatt (0-1, 3.21 ERA) is scheduled to start for SDSU, while RHP Kyle Luckham (3-3, 5.73 ERA) is expected to start for CSF.