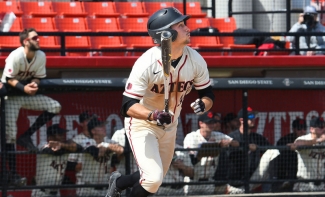 April 2, 2018 (San Diego) - The San Diego State baseball team erased a pair of deficits in a 6-4 victory over Washington on Monday afternoon. SDSU improves to 19-9 on the year while Washington drops to 13-12.

Justin Goossen-Brown logged another successful start for the Aztecs, going 5.1 innings on the mound for SDSU, allowing just one earned run and four hits allowed.

Washington broke a scoreless tie in the top of the fourth, however, the Aztecs were quick to the task of responding, as a Chase Calabuig leadoff double kick-started a two-run, four-hit inning for the Aztecs that featured RBIs from Dean Nevarez and Casey Schmitt.

Washington grabbed its second lead of the game with a two-run top of the sixth, but the Aztecs were able to duplicate their fourth-inning effort with a four-run, five-hit showing. Back-to-back singles by Julian Escobedo and Schmitt started the rally for the Aztecs, and after Joe Fitzhugh reached on a throwing error after attempting a sacrifice bunt, Jacob Maekawa converted on the no-out, bases-loaded situation, hitting a single through the right side of the infield to score Escobedo. David Hensley also recorded an RBI in the frame and the scoring was capped on Calabuig's third double of the game scoring both Maekawa and Hensley.

Taking a 6-3 to the seventh, the Huskies responded with a single run in the eighth, but the SDSU bullpen kept the Huskies scoreless for the remainder of the game to seal SDSU's non-conference win. Casey Schmitt impressed in his 2.2 innings of work to earn his first save of the year, allowing just one hit during his outing.

SDSU travels to Lake Elsinore, Calif. for a neutral-site meeting with Long Beach State at Lake Elsinore Diamond, home of the Class A affiliate of the San Diego Padres, the Lake Elsinore Storm, on Tuesday at 6:00 p.m. RHP Harrison Pyatt will make the start for the Aztecs while LHP Adam Seminaris will take the ball for the Dirtbags.