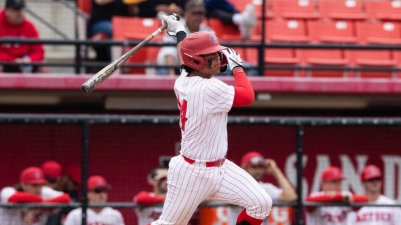 May 1, 2022 (Fresno) - San Diego State captured its second straight series against a Mountain West opponent on Sunday with an 8-5 triumph over Fresno State at Bob Bennett Stadium.

Clinging to a 4-3 lead, the Aztecs (14-31, 6-15 MW) sent nine batters to the plate in the eighth inning, scoring four runs on five hits and one walk to break open a tight contest.

Offensively, eight different SDSU players crossed the plate for the Scarlet and Black, including Poncho Ruiz and Shaun Montoya (2 hits), who both drove in a pair of runs, while T.J. Fondtain finished with two hits as well.
Starting pitcher Chris Canada (2-0) picked up his second career victory after yielding three runs on two hits and four walks in five innings of work. The freshman left-hander struck out four hitters before giving way to five relievers, including Kelena Sauer, who registered his fourth save of the year despite giving up two hits in the ninth.
All four of the Aztecs’ tallies in their eighth-inning surge were plated with two outs, including RBI doubles by Fondtain and Max Foxcroft, while Xavier Carter and Montoya alternated run-scoring singles, respectively.
The Bulldogs (22-22, 11-10) trimmed the margin to 8-5 in the bottom of the frame on Payton Allen’s two-run double with two outs. Fresno State threatened later in the ninth, as Zach Morgan and Vinny Bologna laced consecutive singles with one out. After inducing a fly ball to Ivan Luna, Sauer fielded Josh Lauck’s tapper in front of the mound and calmly threw to first to preserve the victory.
Starter Jake Dixon (1-5) absorbed the loss for the Bulldogs after surrendering four runs (two earned) on three hits and a walk against four strikeouts in four innings pitched, while their fourth reliever Cooper Bergman was charged with all four runs in the eighth.
After Ruiz tagged out Morgan at the plate on a squeeze bunt by Bologna to keep Fresno State off the board in the first, the Aztecs seized the momentum with three markers in the third, as Montoya knocked in Caden Miller with a single to center, while Ruiz belted his fifth homer of the year, a two-run shot off the scoreboard in left center. Previously, Miller reached on a throwing error and promptly took second on another errant throw back to first base following Irvin Weems’ flyout to right.
SDSU tacked on another unearned run in the fourth when Fondtain ripped a triple past a diving Bologna in right field and later crossed the plate when Weems reached on a throwing error by Allen following a grounder to third.
Trailing 4-0, the Bulldogs narrowed the gap in the sixth with three runs on two hits, a pair of walks and hit batter. Fresno State loaded the bases in off Canada, as Morgan and Bologna walked, while Luna was struck by a pitch. Avery Jones took the mound at this juncture, but Morgan raced home on Lauck’s sacrifice fly, while Bologna scored after Blake Wink reached on a fielder’s choice.
Moments later, Wink rounded the bases on consecutive singles by Nate Thimjon and Allen, which pulled the host school to within 4-3. However, Ricky Tibbett entered and induced a groundout to Travis Welker, preventing further damage.
Robert Brodell retired the Bulldogs in order in the seventh, while Jonny Guzman pitched the eighth for the Scarlet and Black.
Wink and Allen finished with two hits apiece to pace Fresno State, with the latter leading all players with three RBIs in the loss.
San Diego State opens an eight-game homestand at Tony Gwynn Stadium starting this week when it squares off against UC San Diego in the fourth installment of the inaugural Trolley Series on Tuesday, May 3, before welcoming CSUN to “America’s Finest City” the following night on Wednesday, May 4. Both games are set to begin at 6 p.m.