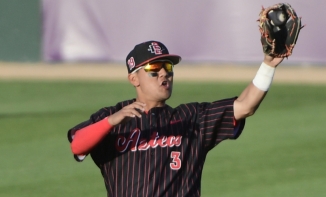 SDSU fell behind after a three-run bottom of the second for the Tigers, featuring two RBI groundouts and a run on a wild pitch.

After three come-from-behind wins in the Mountain West Tournament last weekend, the Aztecs showed signs of continuing that trend in the top of the fourth, using a Julian Escobedo run on a wild pitch and a game-tying two-RBI double by Jacob Maekawa to even up the score at 3-3.

That score remained until the bottom of the sixth, where LSU recorded another three-spot with a four-hit showing.

LSU limited SDSU's offensive production during the middle stages, with 11 of 12 Aztecs being retired from the fifth inning until Jordan Verdon's one-out double in the top of the eighth. Verdon later came around to score two batters later on an Escobedo single.

Logan Boyer held the LSU lineup hitless in the seventh and eighth, keeping just a two-run deficit heading to the ninth inning. In its last chance for a comeback, SDSU was retired in order by LSU closer Todd Peterson in the ninth.

Starting pitcher Jorge Fernandez went three innings, allowing three runs on four hits. Jacob Erickson was dealt a tough-luck loss and fell to 5-4 on the year, allowing just one hit over his first two innings of work before finishing with 2.2 innings pitched with three hits and two runs allowed.

Escobedo recorded two of SDSU's six hits after a 2-for-4 performance with a double and an RBI.

On today’s loss to LSU:

“Hard fought baseball game. I thought the glaring mistakes we made, made a difference in the baseball game today. We have to recover from that in order to come back and play tomorrow and have a good game.”

On his sixth-inning at-bat with LSU third baseman Jake Slaughter:

“I had 0-2 (count) on Slaughter and I was trying to punch him out and get a ball low and he did a good job of staying through and followed it all the way down and hit it up the middle.”

On his style against LSU:

“Going into this game I knew LSU had never seen a guy like me. I take a little bit of pride in that and I kind of tried to stick with that game plan of throwing strikes and being crafty.”

SDSU will play the loser of Oregon State and Northwestern State, which play tonight at 7:00 p.m., tomorrow at 1:00 p.m. in an elimination game at Goss Stadium in Corvallis, Ore.