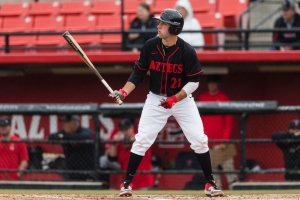 The Beavers scored quickly to distance themselves from the Aztecs early on, scoring four runs before the first out of the game was recorded. Despite the rough start, Daniel Ritcheson settled in afterward, retiring each of the next seven batters he faced.

The Aztecs scored their only run of the game in the second with Joe Fitzhugh scoring on a 6-4-3 double play starting the inning with a leadoff walk.

After the Aztecs got out of bases-loaded jams in both the fifth and sixth innings, the Beavers broke through with a trio of runs in the seventh to bring the score to its final 8-1.

The Aztecs were hindered by nine walks allowed, while the Beaver pitching staff surrendered only two free passes in the contest.

Matt Rudick extended his hitting streak to 21 games with a well-hit single to right field in the sixth inning. Rudick's streak is tied for the longest hitting streak by an Aztec since Mitch Blackburn recorded a hit in 23 consecutive games during the 2010 season.

The Aztecs return to conference play this weekend, playing a three-game series at Nevada that starts on Friday at 6:00 p.m.