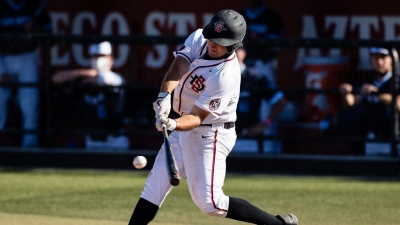 April 30, 2021 (Reno) - San Diego State found itself in uncharted territory on Friday after dropping its first doubleheader of the season with a pair of run-rule losses to Nevada, 14-4 (eight innings) and 13-2 (seven innings) at Peccole Park.

With the setbacks, the Aztecs (22-11) had their four-game winning streak snapped and suffered their first sweep in a twin bill since April 7, 2018 at Air Force. In addition, the Wolf Pack (14-16) secured their second series victory against the Scarlet and Black this year after accomplishing the feat April 10-11 at Tony Gwynn Stadium.

However, SDSU still maintains sole possession of first place in the MW standings with a 14-9 record in conference play, ahead of UNLV (9-6) and Nevada (11-9).

The Wolf Pack combined for 17 extra-base hits to fuel their two wins on Friday, including three home runs apiece in both ends of the twin bill.

In game one, the Aztecs allowed a season-high 20 hits to Nevada, which received three hits each from five players, including Joshua Zamora, who hit two home runs and finished with a game-high three RBIs, while Tyler Bosetti went deep as well with a solo shot and led all individuals with four runs scored.

Trailing 7-1, SDSU narrowed the gap with a pair of markers in the third on run-scoring singles by Brian Leonhardt and Jacob Cruce, as the contest was primed to evolve into a slugfest.

However, Wolf Pack reliever Shane Gustafson (2-2), who entered following Leonhardt’s RBI, kept the Aztecs at bay throughout his stint, allowing just one run on six hits and no walks in the final 5 2/3 innings of the game to pick up his second victory of the season.

In the interim, Bosetti homered in Nevada’s half of the third and later tripled and scored on a wild pitch in the fifth to put the host school up 9-3.

Leonhardt closed out the scoring for SDSU in the seventh on a grounder to first, which plated Mike Jarvis, who led off with a double and advanced to third on Matt Rudick’s single.

After Zamora went yard with a solo shot in the seventh to give Nevada a 10-4 advantage, the Wolf Pack second baseman ended the game with two outs in the eighth on a two-run blast to left, driving in Pete Mendazona, who earlier notched an RBI single following consecutive doubles by Wallace and Stinson.

Aztec starter Troy Melton (3-4) absorbed the loss but was snake-bitten after Nevada pushed across four unearned runs in the first. The SDSU redshirt sophomore allowed eight runs total on 10 hits and one walk against four strikeouts in 3 2/3 innings, while Aaron Eden fanned four batters as well in his subsequent stint of 3 1/3 innings before giving way to Bradley Collins in the eighth.

Jarvis, Rudick and Leonhardt paced the Aztec offense with two hits apiece in the opener.

In game two, San Diego State put a runner aboard in first, fourth and fifth innings but the Wolf Pack stymied each threat with a double play.

In the meantime, Matt Clayton put the hosts in front to stay with a solo homer in the second, while Anthony Flores scored on Gomez’s RBI groundout in the fourth, which gave Nevada a 2-0 advantage.

However, the roof caved in for the Aztecs in the fifth when the Wolf Pack scored 10 runs on seven hits, two walks and two hit batters after sending 14 hitters to the plate. Zamora and Bosetti each smacked a three-run homer, while Stinson drove in three more with a double to left center.

SDSU avoided its first shutout of the year in the seventh when Jarvis scored on pinch hitter T.J. Fondtain’s sacrifice fly, while Rudick crossed the plate on Jaden Fein’s single to right.

Jake Jackson (2-3) pitched a complete game for Nevada, scattering six hits and one walk, while Leonhardt (1-1) took the loss after yielding Clayton’s blast in the second. Michael Paredes entered in the third and pitched 2 2/3 innings before yielding to Kelena Sauer and Jacob Flores, respectively.

Jarvis finished with three of the Aztecs’ six hits, while Fein, Rudick and pinch-hitter Ryan Orr had the other three.

San Diego State wraps up its three-game series at Nevada on Saturday beginning at 1 p.m.