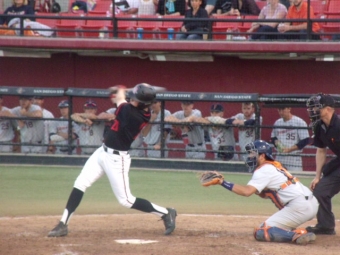 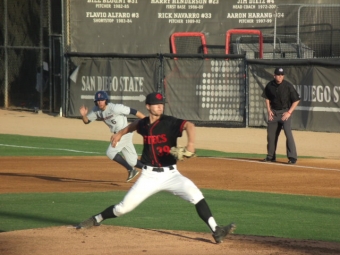 It was a rare sloppy start for Hill as the Titans struck hard and early with junior Ruben Cardenas’ RBI single in the first that scored the leadoff man, junior Hank LoForte, who had singled off of Hill.  Sophomore Daniel Cope loaded the bases and hit another RBI single.  Junior Jake Pavletich hit the Titans’ third RBI single.  Three straight runs gave the Titans a 3-0 lead.

The bottom of the first looked hopeless until Jordan Verdon stepped up to the plate.  The Granite Hills alum and junior at SDSU blasted a line drive two-out, two-run home run to make it a game again.  Junior Chad Bible hit an RBI single of his own to tie the game.  Then freshman Casey Schmitt stepped to the plate and the Titans’ comfy 3-0 lead looked more like a 1-0 lead as Schmitt hit an RBI single and back-to-back RBI singles gave the Aztecs a 4-3 lead. 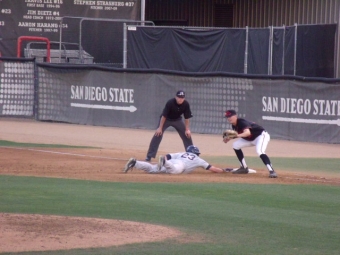 But that was also nothing to the Titans as junior Mitchell Berryhill hit—you guessed it—an RBI single in the second to tie the game.  Cardenas looped a stand-up RBI triple to center for the Titans to reclaim the lead for the Titans.  Cope hit an RBI single that allowed Cardenas to score from second.  It was 6-4 Titans in two innings.  But it felt like 20-4.

Things calmed down for a little bit until Cardenas’ sac fly in the fourth to make it 7-4 Titans.

In the sixth, sophomore Sahid Valenzuela hit a sac fly to kick Aztec freshman Noah Fluman off the mound.  He was replaced by fellow freshman Casey O’Sullivan, who finished the inning, but the Titans still led 8-4. 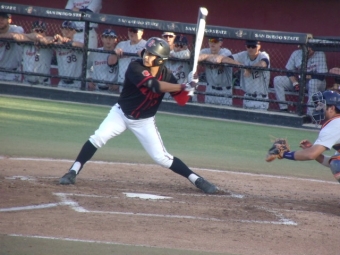 Cope drove in another run on an RBI single in the eighth to make it 9-5 Fullerton.

The Aztecs gained some life in the eighth with Calabuig’s RBI double that scored senior and Patrick Henry alum David Hensley.  Escobedo hit an RBI single to inch the Aztecs even closer.  Junior Chad Bible battled junior Brett Conine and won, hitting another RBI single to get the Aztecs to within one.  Schmitt hit what looked like would be an inning killer; a grounder to short.  But when junior Hank LoForte missed the throw at second, it turned into the game-tying run and the miracle the Aztecs needed.  The score was tied.  And they were still threatening with runners at the corners.  But senior Grant Mayeux grounded out before they could take a lead. 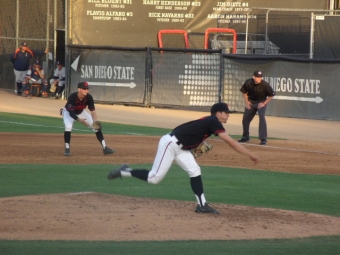 But it was too good to be true.  In the ninth, senior Chris Prescott singled.  Hensley threw home, but the call was safe to give Fullerton their lead back.  Freshman Matt Borgogno put the nail in the coffin with a two-RBI single.  The Aztecs finally turned two outs on a double play, but it was too late; a run scored and the Titans triumphed over the Aztecs 13-9.

Tomorrow’s rubber match is at 1:00 p.m.  Junior Andrew Quezeda will start for the Titans against junior Justin Goosen-Brown for the Aztecs.