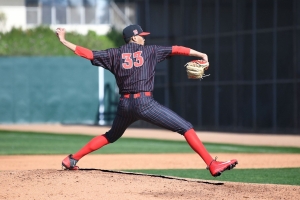 SDSU opened the game with back-to-back base hits with a Matt Rudick single and a Julian Escobedo double, but both were left stranded in scoring position to end the top of the first. Fresno State carried that momentum into their half of the first, scoring five runs for an early 5-0 lead.

Fresno State scored another run in the fourth before Zach Ashford hit a two-run home run in the fifth inning to stretch the lead to 8-0.

After Fresno State ace Ryan Jensen held the Aztecs scoreless for the first six innings, a leadoff double by Jaden Fein in the top of the seventh set up SDSU's first run of the night with the freshman later scoring on a Ryan Orr groundout.

Fresno State extended their lead to 10-1 after Nolan Dempsey hit a two-run home run to left-center in the eighth. Facing a nine-run deficit, Mike Jarvis drove in Angelo Armenta on a single to left to give the Aztecs their second run of the night.

Both Rudick and Armenta went 2-for-4 at the plate to account for four of SDSU's seven hits.

Justin Goossen-Brown fell to 5-4 on the season after a five-inning start. Fresno State's Ryan Jensen improved his record to 9-1, allowing one earned run over his seven-inning, 100-pitch outing.

Christian Winston performed well out of the Aztec bullpen, recording a pair of shutout innings with four strikeouts and two hits allowed.