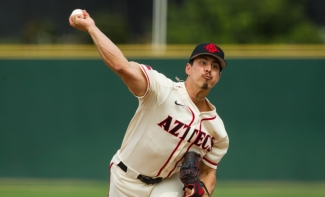 Aztecs are 24-13 heading into conference series with Fresno State

April 17, 2018 (San Diego) - The San Diego State baseball team scored three runs in the bottom of the seventh to erase a 2-0 deficit and defeat CSUN, 3-2, at Tony Gwynn Stadium on Tuesday night. SDSU, which jumps back into Mountain West play this weekend at home against Fresno State, is 24-13 on the season while CSUN drops to 17-19.

In his first start of the 2018 season, Jorge Fernandez kept the CSUN bats close to silent, allowing just one hit in four shutout innings of work. After Fernandez's departure, CSUN was able to collect back-to-back sacrifice flies after loading the bases with no outs in the sixth inning for a 2-0 lead.

SDSU collected just four hits over the game's first six innings, but broke through with a three-run seventh inning. After Chad Bible was hit by a pitch to lead off the inning, Sean Ross hit an RBI double to left that allowed Bible to score all the way from first and cut CSUN's lead to 2-1. The Aztecs tied the game after an errant throw by CSUN third baseman Nolan Burnstead allowed Ross to cross home. The Aztecs took the lead on a two-out, four-pitch, bases-loaded walk drawn by Dean Nevarez that had Jacob Maekawa scoring the eventual game-winning run.

The SDSU bullpen clamped down to hold that lead, as the trio of Adrian Mardueno, David Hensley, and Casey Schmitt retired 12 of the 13 batters they collectively faced and did not allow a CSUN hit in the final three frames.

Marudeno earned his fifth win of the year after retiring all six batters he faced. Schmitt earned his fourth save of the season and his third in the last five days after posting a hitless ninth inning.

UP NEXT
After a five-game hiatus from conference play, SDSU resumes Mountain West action this weekend, hosting Fresno State for a three-game series beginning on Friday at 6:00 p.m.   Stay tuned for word on if ECM Sports will have coverage of Friday's game.
Box
Play-by-play