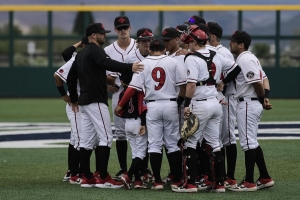 May 24, 2019 (Reno) - The San Diego State baseball team fell to Nevada, 6-4, to finish the Mountain West Championships on Friday afternoon at Peccole Park. The Aztecs finish their season with a 32-25 record.

SDSU, which entered the game with a 19-6 record when scoring first, jumped out to a 4-1 lead in thanks to a 2-RBI single by Casey Schmitt in the first inning, a Jacob Maekawa run on a throwing error while stealing third in the fourth, and an Angelo Armenta single to left field scoring Matt Rudick in the fourth.

Adrian Mardueno cruised through the game's first four innings, allowing just one run on three hits over the game's first four frames. In the fifth, Mardueno, who entered the inning with 65 innings pitched without allowing a home run this season, surrendered back-to-back-to-back home runs to Nevada's Jaylon McLaughlin, Daniel Perry, and Keaton Smith to tie the game at 4-4.

The Wolf Pack took the lead for good in the sixth, using McLaughlin and Perry RBI base hits to bring the score to 6-4.

After SDSU tagged Wolf Pack starter Owen Sharts for four runs over 3.2 innings pitched, the Nevada bullpen duo of Dalton Gomez and Grant Ford limited the Aztecs to just one hit for the remainder of the game.

After hitting into five double plays yesterday against UNLV, the Aztecs once again were hindered by twin-killings against the Wolf Pack, grounding into a trio of double plays, including inning-ending twin killings in the fifth and sixth innings.

The Aztecs finished the 2019 season with their sixth 30-win season in the last seven years, a span that is the best active stretch in the Mountain West.