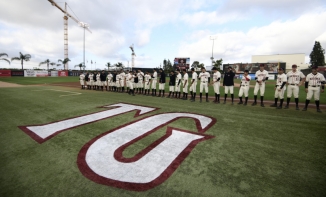 June 2, 2018 (Corvallis, Ore.) - The San Diego State baseball team suffered a 9-0 loss in an elimination game against Northwestern State Saturday afternoon at Goss Stadium. The Aztecs finish its season 39-21 after reaching an NCAA Regional for the fifth time in the last six years.

After Northwestern State took an early 1-0 lead in the top of the first, a three-run home run by Demons right fielder Tyler Smith extended the NWST lead to 4-0.

The Aztecs' best offensive chance came in the bottom of the sixth, as David Hensley kicked the inning off with a double. After Chase Calabuig drew a walk and Chad Bible was hit by a pitch, Maddox was able to maintain the Demons' 5-0 lead, forcing Julian Escobedo to ground into a 4-6-3 double play.

“First of all, outstanding job by Northwestern State today. Jerry Maddox pitched like Greg Maddux today. He held us in check. He did a great job throwing strikes. I think we did a poor job of managing our at-bats but he definitely did not do us any favors. He pitched very well so you have to give him a lot of credit.

“It is a tough way to end the season. I am very proud of our guys. Thirty-nine wins. Mountain West champions. We have a lot of work to do and we expect to be in regionals next year and from here on out.

“Bottom line it was his change of speeds. He kind of kept us off balance. He had the curveball in the 60 mile-an-hour range. So we had to regard that and that was hard for our guys to lay off of that. He did a great job of changing speeds, especially in big moments. We had a couple of opportunities to get some runs on the board. We had the bases loaded and had an opportunity to do some damage and just didn’t do it.  You have to tip your hat to that young man today. He pitched his tail off.”

“He was changing speeds a lot. He had good command of his fastball in and out of the zone. When he needed to, he would throw that off-speed pitch to keep us off balance. I think some of our hitters had a tough time keeping that out of their heads when they went into the box. He pitched a good game.

On looking back on his college career:

“It has been a ride. I have been through it all. Coach has given me plenty of opportunities here and has turned me into the man I am today. I am very proud to say I will be part of the Aztec Family for the rest of my life.

“Our team is built off of chemistry and we like to go out there and fight. We have each other’s back. I think that is something that comes with being an Aztec Family. That is going to live on for a while. I am excited to see what the future becomes for this program.”