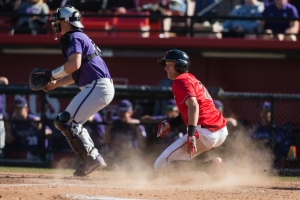 Jaden Fein led the Aztecs offensively, going 3-for-4 with a solo home run, three runs scored and a double, falling just a triple shy of the cycle. Casey Schmitt and Angelo Armenta also contributed multi-hit performances, with both going 2-for-4 with a pair of runs scored.

SDSU started the scoring early, opening the game with a three-run first inning. Joe Fitzhugh drove in Matt Rudick with a sacrifice fly before Armenta scored on a wild pitch and Schmitt scored on a Bulldog fielding error.

After an error allowed a second-inning run to score for the Bulldogs, Fein was able to get that run right back, hitting his second home run of the season over the left-centerfield wall to make it a 4-1 Aztec lead.

The Bulldogs were able to tighten things with a two-run, two-hit, two-error fourth inning to cut the Aztec lead to 4-3. David Alamillo provided some breathing room with a two-out RBI single scoring Fein in the fourth making the score 5-3.

Later in the inning, Schmitt recorded a two-RBI single before later scoring on a wild pitch. Fitzhugh capped the inning with his second sacrifice fly of the game, scoring Schmitt and extending the lead to 10-3.

After two runs for the Bulldogs in the eighth made the score 10-5, Armenta recorded an RBI double to add a late-inning insurance run. Facing an 11-5 deficit, the Bulldogs were able to score a run on a bases-loaded walk, but Valhalla alum Casey O'Sullivan halted any additional run-scoring chances and stranded the bases loaded after recording a game-ending strikeout against Emilio Nogales.

On the mound, Casey Schmitt earned his second win of the season, throwing five innings with four hits, one earned run, one walk allowed while striking out four.

In addition to his RBI double, on the mound Paredes held the Bulldogs in check through the middle innings, allowing four hits and one earned run over 2.2 innings of work. O'Sullivan finished the game on the mound for the Aztecs, logging a trio of strikeouts with two hits and no earned runs allowed in 1.1 innings.

UP NEXT
The Aztecs visit defending national champion Oregon State (19-5-1) for a two-game series on Tuesday and Wednesday. Both games are scheduled for 5:35 p.m. and will air on Pac-12 Plus.