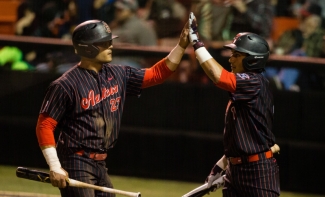 SDSU extends its winning streak to a season-best four games

The Rebels jumped out to a 5-0 lead with a four-run second inning and a single run in the fourth. SDSU began to chip away at the lead with a pair of runs scoring in the bottom of the fourth in thanks to a Casey Schmitt RBI single and a Jacob Maekawa RBI double.

The Aztecs erased UNLV's lead with a five-run fifth inning that was kickstarted by back-to-back one-out singles by Chase Calabuig and Jordan Verdon. Calabuig scored SDSU's third run of the game on a bloop single by Dean Nevarez, and two batters later, Chad Bible delivered the game-tying base-hit with a well-hit two-RBI double down the left field line to tie the game and score both Nevarez and Verdon.

The Aztecs took the lead after Schmitt logged his second RBI of the day after grounding out to second to score Julian Escobedo. Bible later scored the eventual game-winning run on a wild pitch to cap SDSU's five-run fifth inning.

UNLV posted its only run against the SDSU bullpen in the sixth. The Aztec bullpen, led by Justin Goossen-Brown, collectively recorded 5.2 innings of one-run, three-hit performance to keep UNLV's bats quiets in the later stages of the game. Goossen-Brown earned his third win of the season, allowing one hit and one run over two innings pitched.

Reliever Adrian Mardueno came through in a big spot for SDSU, stranding a trio of runners in the top of the seventh after forcing UNLV's Dillon Johnson to ground out to second to record the final out of the frame.

David Hensley retired all six batters he faced to record his first career save. Hensley needed just 22 pitches to navigate his outing and logged a season-high two strikeouts.

SDSU will go for a series sweep of UNLV tomorrow afternoon, hosting the Rebels for the series finale scheduled to begin at 1:00 p.m. RHP Jorge Fernandez (4-3, 3.34 ERA) will get the ball for the Aztecs while UNLV's RHP Trevor Horn (3-3, 7.17) will take the mound for the Rebels.