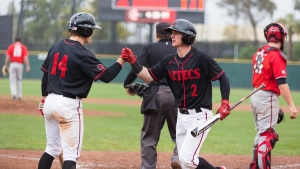 Ryan Orr goes 3 for 4 with three RBIs in victory

May 11, 2019 (Fresno) - The San Diego State baseball team used six multiple hit-performances and a four-inning save with no earned runs allowed by Adrian Mardueno in a 10-6 win over Fresno State on Saturday night. With the series now tied, the Aztecs are now 1.5 games behind the Bulldogs in the Mountain West standings.

The Aztecs and Bulldogs went back-and-forth during the game's first three innings, as a 2-0 lead built by the Aztecs in the top of the second was quickly erased with a two-run effort by the Bulldogs in the bottom of the second.

After Mike Jarvis put the Aztecs ahead with an RBI single in the top of the third, Fresno State once again wiped away SDSU's early lead, posting a three-run third inning to take a 5-3 lead.

The Aztecs showed eagerness despite the newly acquired deficit, as Angelo Armenta tied the game at 5-5 in the top of the fourth with his second home run of the season -- a two-run shot over the wall in right field driving home Casey Schmitt.

An inning later, Jacob Maekawa singled to left field and after the ball was mishandled by Bulldog left fielder Austin Chastain, Ryan Orr scored to give SDSU a 6-5 lead and put the Aztecs on top for good.

The Aztecs crossed home a trio of important insurance runs in the top of the sixth, including another RBI single by Jarvis and a 2-RBI single by Orr.

After Michael Paredes delivered a five-inning inning start with seven hits, five runs and one walk allowed to earn his third win of the year, SDSU turned towards Adrian Mardueno for the game's final four innings. Mardueno, who earned his second save of the year, finished another stellar outing one walk, no earned runs, and five strikeouts.

Paredes and Mardueno teamed up for a span of 12 consecutive batters retired -- a streak that was snapped in Fresno State's one-run seventh that featured an unearned Bulldog run crossing the plate.

The Aztecs brought the score to its final 10-6 with Matt Rudick posting an RBI single in the top of the ninth.

With major conference standings implications on the line, the rubber game of the series between the Aztecs and Bulldogs is scheduled for tomorrow at 1:00 p.m. The game will be broadcast on the Mountain West Network, and SDSU RHP Aaron Eden (4-1, 3.31 ERA) is scheduled to take the ball against Fresno State's LHP Nikoh Mitchell (2-4, 4.81 ERA).