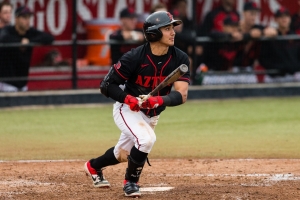 After allowing a first-inning run, Goossen-Brown held the Wolf Pack scoreless for the remaining seven innings of his outing and finished his night with nine strikeouts while only allowing one walk and four hits.

The SDSU lineup was held scoreless for the first five innings, but a four-run sixth inning provided Goossen-Brown with more than enough run support. Casey Schmitt tied the game at 1-1 with a single scoring Matt Rudick, while in the next at bat, Angelo Armenta scored both Schmitt and Escobedo on a 2-RBI down the left field line. SDSU capped the sixth-inning scoring with a Mike Jarvis RBI double, allowing Armenta to cross home plate.

In the ensuing inning, Escobedo drove home Devyn Lopez and Ryan Orr on a single to bring the score to 6-1.

The Wolf Pack ended a run of seven consecutive scoreless innings with a single run in the ninth, bringing the score to its final 6-2.

SDSU's 2-3-4 hitters of Escobedo, Schmitt, and Armenta all recorded multi-hit showings, while Escobedo and Armenta both drove in two runs apiece.

On the mound for Nevada, Owen Sharts fell to 2-6 on the year with seven hits and four runs allowed over six innings pitched.

The rubber game between the Aztecs and Wolf Pack is scheduled for Sunday at 1:00 p.m. Casey Schmitt is set to make the start on the mound for SDSU.