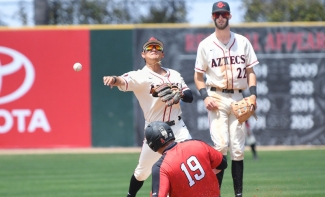 Harrison Pyatt took a no-hitter bid into the seventh

May 4, 2018 (Alberquerque) - The San Diego State baseball team won its road series opener against Mountain West foe New Mexico 11-5 on Friday night. SDSU extends its winning streak to seven games and improves to 32-14 (14-7) on the year, while New Mexico drops to 15-29-1 (8-17 MW). With Nevada's 4-2 win over Fresno State on Friday night, the Aztecs remain a game back of first place in the Mountain West standings.

Pyatt finished his day with only two hits and four earned runs allowed while striking out six and walking two.

The Aztec lineup presented a persistent attack, having scored in eight of a possible nine frames. The Aztecs posted a single run in the first, second, third, fourth, and sixth innings to gain a 5-1 advantage heading to the later stages of the game.

The Aztecs broke things open in the seventh and eighth, posting five runs over that span to gain a 10-5 lead. Jordan Verdon posted a two-run homer for his team-leading 10th home run of the year in the top of the seventh, while Matt Rudick and Chase Calabuig both posted RBI singles in the top of the eighth.

Christian Winston collected his first save of the season in his most impressive outing of the year, posting 2.2 innings of hitless relief. The freshman retired eight of the nine batters he faced and finished his evening with one strikeout and one walk allowed.

SDSU goes for its fourth consecutive series win in tomorrow's middle game against UNM. Logan Boyer will make the start for SDSU in Saturday's contest scheduled to start at 2:00 p.m. MT.