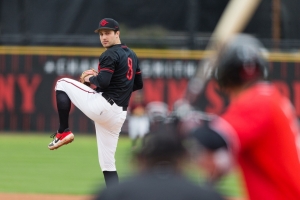 March 6, 2019 (San Diego) - The San Diego State baseball team suffered a wild 12-9 setback against No. 14/11 Texas Tech on Wednesday afternoon at Tony Gwynn Stadium. The Aztecs fall to 5-6 on the year, while the Red Raiders improve to 8-3.

SDSU opened the game with a 5-0 lead, largely in thanks to a solid performance by Casey Schmitt in his first-ever college start. Schmitt went three innings, allowing just one hit while walking two and striking out a pair. The lone hit Schmitt surrendered -- a Josh Jung single -- was immediately erased after an outfield assist from Matt Rudick ended the top of the first.

The Aztecs swung the bats well early, using three consecutive base hits from Rudick, Julian Escobedo, and Angelo Armenta to string together a pair of runs in the first frame. SDSU built that lead to 3-0 in their next chance at bat, using an Escobedo fielder's choice to bring home Mike Jarvis.

The lead grew to 5-0 after Escobedo launched his second home run of the season over the right-field wall in the bottom of the fourth.

On the mound, SDSU had just one hit allowed through the game's first four innings.

Texas Tech began chipping away in the fifth, as four consecutive walks allowed the Red Raiders to score their first run of the game. TTU finished the inning scoring three runs with one hit and one error in addition to the four frame-opening walks.

The Red Raiders cut the deficit to just one in the sixth after Dylan Neuse hit his third home run of the season in the top of the sixth. TTU extended that lead in the eighth, with a four-run, four-hit inning to take an 8-5 lead.

Although facing an 8-5 hole, the Aztecs snapped the Red Raiders run of eight consecutive unanswered runs in the bottom of the eighth after Ryan Orr drove in a pair of runs to cut the Aztec deficit to 8-7. In the next at-bat, pinch hitter Chad Bible drove in Orr on a single to center before Mike Jarvis brought to go-ahead run home on a triple to right-centerfield.

After quickly recording two outs in the bottom of the ninth in his first collegiate pitching appearance, Escobedo surrendered a walk, an intentional walk, and a hit by pitch before Red Raider first baseman Cameron Warren hit a go-ahead grand slam on a 1-0 count to take a 12-9 lead.

The Aztecs had the tying run at the plate in the ninth, as Rudick and Armenta singled and drew a walk, respectively, to give SDSU another chance at erasing a TTU lead. Unfortunately for SDSU, Hunter Dobbins was able to induce a foul pop out on Brian Leonhardt to finish off a 4:11 contest.

Rudick led the Aztec lineup with a career-high four hits in a 4-for-5 performance with three runs scored. Escobedo finished 3-for-6 with three RBIs, while Brian Leonhardt also contributed a multi-hit performance, going 2-for-5 with an RBI.

Taylor Floyd earned the win for TTU, improving to 2-1, while Dobbins earned his first save of the season.

The two teams combined for 18 pitchers used and 366 pitches thrown.