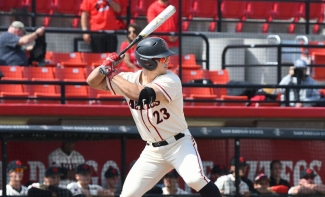 April 7, 2018 (Colorado Springs, Colo.) - The San Diego State baseball team fell to Air Force 12-7 to complete a Saturday doubleheader. The Aztecs now sit at 20-11 overall and 7-6 in the Mountain West.

To start the scoring in a chilly, 42-degree contest, SDSU scraped across a first-inning run, capitalizing on an error by Air Force right fielder Ashton Easly after David Hensley singled and reached third base on the play. Hensley came around to score on an RBI groundout by Chase Calabuig for an early 1-0 lead.

With the game tied at 1-1, the Aztecs recorded three consecutive extra-base hits with a Calabuig triple and back-to-back doubles by Jordan Verdon and Chad Bible created a 3-1 lead for SDSU.

The Aztecs extended that lead to 5-1 after a five-hit sixth inning, including an RBI infield single by Hensley that allowed Matt Rudick to score.

Air Force made that lead short-lived, however, as the Falcons used a 34-minute rain delay, four walks and a two-out 2-RBI double by Jacob Booker to tie the game at 5-5 in the bottom of the sixth.

Despite the big inning for the Falcons, SDSU was quick to respond, opening the top of the seventh with back-to-back home runs by Bible and Julian Escobedo.

Again, Air Force continued the see-saw trend in the bottom of the seventh, using a 2-RBI double by Rob Dau and a two-run homer by Nic Ready to take a 9-7 lead. The frame finished with three Aztec errors, allowing Air Force to grab a five-run lead and bring the score to its final, 12-7.

On the mound, Daniel Ritcheson went five innings with four hits and three runs allowed while striking out seven in his first career weekend start. Jorge Fernandez was dealt his third loss of the season while Ray Lambert pitched a 1-2-3 eighth inning in relief.

SDSU and Air Force will wrap up its three-game series at noon tomorrow. RHP Justin Goossen-Brown will make the start for the Aztecs.