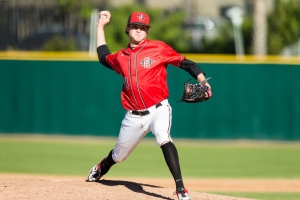 Justin Goossen-Brown posted an impressive start for the Aztecs, allowing just one run -- a McCarthy Tatum fourth-inning solo home run -- over a seven-inning start with four hits, two walks, and a season-high seven strikeouts. Goossen-Brown worked efficiently throughout the night, using 101 pitches over his outing while lowering his season ERA to 3.63.

Heading into tonight, SDSU was a perfect 5-0 in games which Goossen-Brown started.

Out of the bullpen, Christian Winston retired both of the batters he faced, while Adrian Mardueno allowed one hit and one earned run while striking out two in 1.1 innings of work.

The Aztecs broke up Fresno State starter Davis Moore's no-hit bid in the sixth inning, as Chad Bible and Matt Rudick both recorded infield singles in the frame. Both runners were left stranded, however, as the sixth-inning scoring threat ended after Mike Jarvis lined out to Fresno State shortstop JT Arruda.

SDSU also had a scoring chance in the eighth, with Joe Fitzhugh starting the inning with a well-hit single to left field. After Fitzhugh advanced to second on a Julian Escobedo groundout, Moore was able to strand the potential game-tying run by recording an inning-ending strikeout.

Matt Rudick and Joe Fitzhugh extended their hitting streaks to 18 and eight, respectively.

SDSU and Fresno State will conclude a three-game series tomorrow with first pitch scheduled for 1:00 p.m. at Tony Gwynn Stadium.