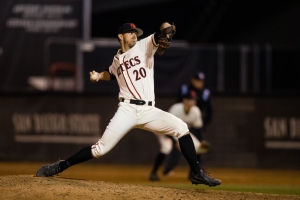 February 24, 2018 (San Diego) - The San Diego State baseball team fell victim to a three-run ninth inning, suffering a 5-2 setback against No. 4 Arkansas on Saturday night in the Tony Gwynn Legacy at Tony Gwynn Stadium.  The Aztecs fall to 4-2 on the season, while the fourth-ranked Razorbacks improve to 5-1 in 2018.

Arkansas was quick to score first against SDSU starter Harrison Pyatt, tacking on a run in the first inning on a Dominic Fletcher sacrifice fly.

The Aztecs tie things up in the third inning, however, with Denz’l Chapman taking the first pitch he has seen at the plate this season and hitting a line-drive triple down the right-field line to kick off the inning. Chapman later came around to score three batters later on a throwing error by Arkansas shortstop Jax Biggers.

With Pyatt entering the sixth inning having retired seven in a row, Arkansas gained a brief momentum shift in the top half of the sixth, with an Eric Cole solo home run creating a 2-1 Arkansas lead and ending Pyatt’s successful outing with five innings pitched, two hits allowed, two runs allowed, three walks, and three strikeouts.

Daniel Ritcheson came on in relief of Pyatt and maintained the one-run deficit by retiring each of the first six batters he faced, including inducing a sixth-inning-ending fly out to strand a Razorbacks runner at third base.

Chase Calabuig continued his red-hot start to the 2018 campaign in the bottom of the sixth, posting a leadoff double to give the Aztecs a runner in scoring position with no outs. After advancing to third on an error by Arkansas left fielder Heston Kjerstad, Calabuig crossed the plate on a Dean Nevarez line-drive single to centerfield to tie the game back up at 2-2.

Biggers led off the top of the eighth with a single and subsequently stole second base to give the Razorbacks a man in scoring position with no outs.  Biggers advanced an additional 90 feet on a wild pitch, however, was left stranded after Ritcheson induced a groundout and his third strikeout of the night. With two outs in the inning, the Aztecs decided to intentionally walk Kjerstad to load the bases and the decision paid for the Aztecs, as Ritcheson forced a groundball to SDSU shortstop David Hensley, who made a strong throw on a difficult play in the hole to keep the game tied at 2-2.

Offensively, the Aztecs ran into Arkansas reliever Matt Cronin, who earned the win after pitching four innings of perfect relief with five strikeouts. Ritcheson was dealt a tough-luck loss, allowing just one run and one hit over three innings of relief.

Back-to-back walks and a throwing error to start the ninth inning eventually doomed the Aztecs, as it opened the door for three ninth-inning runs and brought the score to its final, 5-2.

SDSU baseball concludes the Tony Gwynn Legacy tournament tomorrow, Sunday, Feb. 25 at 2:00 p.m. against Grand Canyon. Junior RHP Garrett Hill is scheduled to make his second career SDSU start while GCU is expected to send LHP Jake Repavich to the mound.  ECM will have live coverage of this game.  You can follow @ECMagSports on Twitter for live coverage and updates starting at 2:00 p.m.