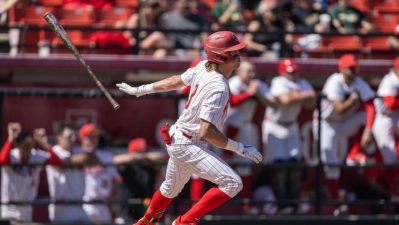 May 13, 2022 (San Diego) -  With its conference tournament fortunes hanging in the balance, San Diego State dropped a crucial 6-3 decision to visiting Nevada on Friday in the opener of a weekend series at Tony Gwynn Stadium.

With the loss, the Aztecs (16-34, 8-17 MW) remain four games behind Air Force and Fresno State for fourth place in the Mountain West standings with five games to play for all three squads. The top four teams will qualify for the conference tournament later this month in San Diego.

Meanwhile, the second-place Wolf Pack (26-21, 16-9 MW) sit two games in back of UNLV after combining for three runs over the final two innings to escape with the win over the Scarlet and Black.

Offensively, the Aztecs were led by Cole Carrigg (2-for-4), who belted a solo home run in the second inning before and later drove in Poncho Ruiz with a single in the sixth, while Caden Miller added a sacrifice fly to provide SDSU’s final tally.

However, Nevada scored the go-ahead run in the eighth when Dario Gomez lifted a two-out single to left, plating Landon Wallace, who previously walked and took second on Matt Clayton’s base hit through the left side.

The Wolf Pack added some insurance in the ninth when Jacob Stinson walked, stole second and raced home on Pat Caulfield’s single to shallow right center. Wallace, meanwhile, walked and advanced to third on the hit before crossing on the plate on a failed pickoff attempt at first base.

The contest began as a pitcher’s duel between SDSU’s Troy Melton and Nevada’s Peyton Stumbo, with each team trading runs to account for a 1-1 tie by the fifth inning.

In the top of the sixth, Nevada plated two runs on Josh Zamora’s solo homer to left, while Wallace singled and ultimately scored on Gomez’s RBI single through the right side.

The Aztecs fought back in the bottom of the frame when Ruiz led off with a double and continued to circle the bases on Carrigg base knock to left field.

Later in the seventh, Kenny LeBeau roped a one-out double down the right-field line and took second on a walk to Tyler Glowacki before moving to third on Irvin Weems’ sacrifice bunt. Moments later, Miller lifted a 1-2 pitch to left center, bringing home LeBeau.

However, the Scarlet and Black was unable to gain the upper hand as Tyler Cochran struck out Ruiz to wiggle free from further trouble.

Cochran (4-2) picked up the victory with three scoreless and hitless innings in relief of Alejandro Murillo, who was pulled after facing the first two batters in the seventh.

Conversely, Brodell (1-2) absorbed the loss after surrendering the go-ahead run in the eighth.  Brodell took over for Melton, who gave up three runs on 10 hits without a walk in seven innings during which he struck out five batters. In addition, Jonny Guzman (1.0 IP, 2 R, 2 H), and Kelena Sauer (0.1 IP, 1 H) rounded out SDSU’s relief corps on Friday.

On the flip side, Stumbo endured six innings, allowing two runs on five hits and a pair of walks against two strikeouts. Gomez and Ryan Jackson led all players with three hits, while Zamora, Caulfield, Clayton had two apiece in the win.

Both teams stranded nine runners for the game. After Carrigg’s blast in the second, the Aztecs had a chance to add to their lead after Shaun Montoya singled and Brian Leonhardt walked. However, Stumbo got out of the jam with a strikeout and a grounder to second.

San Diego State continues its series with Nevada on Saturday at 6 p.m. The contest will be streamed live once again on the MW Network, with a link available on GoAztecs.com.