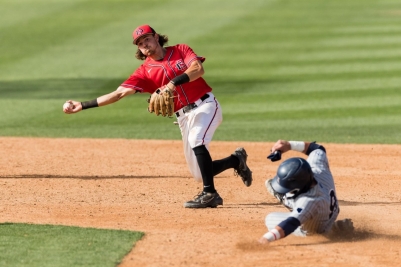 Aztecs drop first series of the season after eight weekends

April 11, 2021 (San Diego) - San Diego State dropped its first series of the season on Sunday after falling to Nevada by a 5-3 count in the rubber game of a weekend set at Tony Gwynn Stadium.

Despite suffering consecutive losses for the first time this season, the Aztecs (17-8, 12-5 MW) still find themselves a game-and-half ahead of second-place UNLV in the Mountain West standings.

SDSU was in pursuit mode for most of the game after the Wolf Pack (10-13, 7-8 MW) grabbed a 2-0 lead in the first inning. Joshua Zamora hit a one-out double and eventually raced home on Dario Gomez’s run-scoring single. Following a flyout and a wild pitch, Gomez touched the plate on Matt Clayton’s RBI single to left.

The Aztecs had a chance to narrow the gap in the bottom of the second with two outs after Ryan Orr walked and stole second. Moments later, Fisher Pyatt drew a base on balls, while Caden Miller roped a single to shallow center. However, Orr was tagged out by catcher Marco Valenzuela on the throw home, which kept the host school of the scoreboard.

SDSU finally broke through with a pair of runs in the fourth after designated hitter Cole Carrigg drove in Jacob Cruce with a single to right, while Jaden Fein scored on Orr’s grounder to short. Previously, Cruce reached on a fielding error by third baseman Tyler Bosetti, while Fein doubled down the left field line.

However, Nevada took the lead for good at 3-2 with one out in the top of the fifth on three straight singles by Jacob Stinson, Bosetti and Zamora off Aztec starter Ricky Tibbett.

The Wolf Pack extended the margin to 5-2 in the sixth with two unearned runs off Carrigg, who replaced Tibbett to start the inning. Clayton reached on a fielding error and advanced to third on Landon Wallace’s single through the right side. Wyatt Tilley soon followed with a sacrifice fly.

Shortly thereafter, Wallace stole second and raced around to third on Valenzuela’s single through the left side, which chased Carrigg off the hill. After Stinson was hit by a pitch from new Aztec reliever Christian Winston, Wallace raced home on a fielder’s choice grounder by Bosetti.

The Aztecs could draw no closer, however, as the contest evolved into a battle of bullpens. The Wolf Pack quartet of Shane Gustafson, Tanner Cunha, Kade Morris and Tyler Cochran limited the Scarlet and Black to three hits and a walk over the final 3 2/3 innings.

SDSU countered with the trio of Winston, Kohl Simas and Tre Brown, who yielded just two hits in a combined 3 2/3 innings as well. Brown was superb in his appearance with five strikeouts, fanning all three batters he faced in the ninth.

The Aztecs put a runner aboard in each of the final three innings but could not capitalize. After Pyatt led off the ninth with a single to right, Cochran induced a double play and a ground out to collect his third save of the season.

Rudick (3), Pyatt (2) and Miller (2) combined for seven of the Aztecs’ nine hits.  On the flip side, Nevada finished with 12 hits of its own, including three by Gomez, while Zamora, Wallace and Stinston had two apiece.

San Diego State returns to the diamond next weekend when it travels to Fresno State for just its second road series of the conference schedule, April 17-18 at Pete Beiden Field at Bob Bennett Stadium in Fresno California.