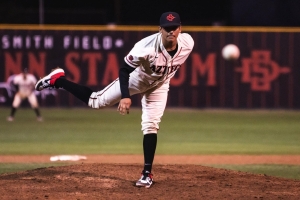 Making his second career start, Mardueno recorded a career-high eight strikeouts over five innings of work while allowing just one run on four hits with one walk. After Connor Mang led off the top of the second with a double, Mardueno retired each of the next four batters he faced via strikeout.

The Lobos broke through with their first run in the top of the fourth, scoring a run on Reese O'Farrell's RBI single.

The Aztecs had multiple run-scoring opportunities throughout the game, including the third, fifth, and sixth innings where SDSU left multiple runners on base.

In the sixth facing a 1-0 deficit, Julian Escobedo and Angelo Armenta hit back-to-back singles to give the Aztecs runners at the corners with one out. After Armenta stole second base, New Mexico's Justin Slaten recorded back-to-back strikeouts to leave a pair of runners stranded in scoring position and end the threat.

Michael Paredes and Casey Schmitt both kept the Lobo lineup modest throughout the late stages of the game. Paredes surrendered just one unearned run over 1.2 innings of work, while Schmitt did not allow a hit and struck out four in the game's final 1.2 innings.

New Mexico added an insurance run in the top of the eighth with Tanner Baker scoring on a passed ball.

The Aztecs brought the tying run to the plate in the bottom of the ninth after Mike Jarvis hit a two-out single to centerfield. New Mexico closer Malachi Emond was able to record his 10th save of the season, however, striking out pinch hitter Jacob Cruce after a six-pitch at-bat.

Mardueno was dealt the tough-luck loss, while Slaten earned the win for the Lobos, pitching 6.1 innings with four hits, no runs, two walks, and six strikeouts.

The rubber game between the Aztecs and Lobos is scheduled for tomorrow at 12:00 p.m.