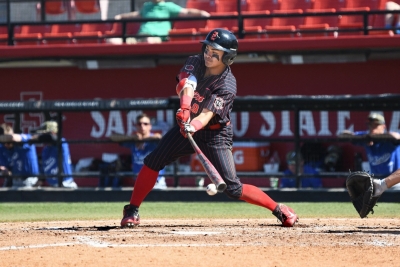 Aztecs unable to score after loading the bases in ninth

February 28, 2020 (San Diego) - Despite a pair of threats in the final two innings, San Diego State dropped its second straight game to Oregon State on Friday after suffering a 4-1 defeat at Tony Gwynn Stadium.

Three Aztec pitchers combined for 11 strikeouts; however, the offense was unable to hold its end of the bargain, stranding 10 runners on six hits and five walks.

Trailing 4-0, San Diego State (6-4) finally broke through for a run in the bottom of the eighth when Matt Rudick tripled down the left field line and promptly scored on Casey Schmitt’s sacrifice fly. Ryan Orr soon followed with a double to left center, chasing reliever Reid Sebby. However, Anthony Walters struck out swinging on three pitches from Cooper Hjerpe to end the inning.

The Aztecs loaded the bases in the ninth on a pair of walks to Wyatt Hendrie and Jaden Fein, sandwiched around a single by Brian Leonhardt. However, SDSU was unable to capitalize, as Hjerpe fought himself off the ropes by striking out pinch-hitter Noah Kaagan and Mike Jarvis, while Rudick flied out to left to end the game.

OSU starter Christian Chamberlain (2-0) earned the victory after holding the Aztecs scoreless on two hits and three walks while striking out seven in 5 2/3 innings of work.

The Beavers (5-4) were paced offensively by Andy Armstrong, who recorded two hits and two runs scored, while Matthew Grelter finished with a pair of RBIs.

Conversely, Rudick led the Aztecs with two hits on the evening.

OSU jumped in front for good with two outs in the top of the first on Cole Hamilton’s RBI single, which brought home Jake Dukart from second. Previously, Dukart walked and advanced on Troy Claunch’s base hit up the middle.

The Beavers added another tally in the second when Armstrong doubled and later scored on Gretler’s one-out single to center.

SDSU put two runners aboard in its half of the second after Orr walked and Walters singled. However, Chamberlain struck out the next three batters to extinguish the threat.

OSU increased its advantage in the fourth on a double steal, as Armstrong raced home when Joe Casey broke for second. With one out, Armstrong singled and took third on Casey’s base hit that squirted through the right side.

The Beavers added an unearned run in the sixth when Kyler McMahan scored on Grelter’s sacrifice fly to left. Earlier, McMahan reached on an infield single and advanced to second on a throwing error, before moving to third on a flyout to right.

Shortly thereafter, the Aztecs had a chance to trim the deficit with two outs in their half of the frame after Rudick singled and advanced on two wild pitches from Chamberlain, while Orr walked. However, Sebby entered at this juncture and induced a flyout by Walters.

San Diego State continues its home series with Oregon State on Saturday, beginning at 6 p.m. Troy Melton (2-0, 1.64 ERA) is expected to start for the Aztecs against the Beavers’ Nathan Burns (0-0, 3.09 ERA).