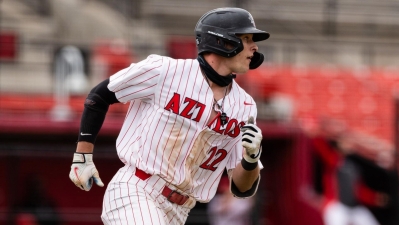 May 1, 2021 (Reno) - San Diego State was unable to avoid its first sweep of the 2021 campaign on Saturday after falling to Nevada 15-7 in the final game of a weekend series at Peccole Park.

Ironically, SDSU was last swept in a regularly scheduled three-game series five years ago to the date, April 29-May 1, 2016, against the same Nevada program at Tony Gwynn Stadium.

In addition, the six deep shots were the most given up in a game by the Aztecs since Air Force hit seven on May 13, 2018 in an 18-11 victory over SDSU in Colorado Springs.

On Saturday, the Aztecs were forced to play catch-up for most of the game after falling behind 2-0 in the first inning. Nevada capitalized on a pair of wild pitches following consecutive singles by Tyler Bosetti and Joshua Zamora. Bosetti crossed the plate on the second errant delivery, while Zamora touched home on Dillon Shrum’s base hit to right center.

SDSU dented the scoreboard in the second when Cole Carrigg doubled home Jaden Fein, who led off with a single up the middle. However, the Wolf Pack responded with back-to-back solo home runs by Eric Valenzuela and Bosetti with two outs to build a 4-1 lead.

The Aztecs once again trimmed the deficit on Fein’s third homer of the year, a solo blast to left to lead off the fourth. Yet the Wolf Pack gave themselves some more breathing room, thanks to two additional long balls in their half of the frame. After Anthony Flores reached on a throwing error and a subsequent groundout, Valenzuela went deep in his second straight at-bat, which chased SDSU starter Ricky Tibbett. Moments later, Zamora went yard against reliever Tre Brown, putting the hosts up 7-2.

The Aztecs seized a little momentum by scoring four runs over the next three innings to pull within 7-6. Caden Miller was hit by a pitch to lead off the fifth and moved to third on Mike Jarvis’ double before racing home on Wyatt Hendrie’s sacrifice fly. However, Nevada got a double-play grounder to prevent further damage.

Later in the sixth, Carrigg ripped a one-out double to left and promptly scored on back-to-back wild pitches before the Scarlet and Black plated two more markers in the seventh. Jarvis and Matt Rudick were both struck by a pitch to start the inning, scoring on Hendrie’s run-scoring single and Brian Leonhardt’s RBI groundout, respectively. However, SDSU could not gain the upper hand after Wolf Pack reliever Tyler Cochran induced two more grounders.

Nevada extinguished any remaining threats by scoring eight runs over the next two innings. Bosetti cracked a three-run homer with two outs in the seventh, as the Wolf Pack took advantage of an Aztec fielding error. Pete Mendazona also contributed an RBI single earlier in the frame.

The Wolf Pack added three more tallies in the eighth on Shrum’s two-run shot over the fence in right, while Flores drove in another with a single to center.

SDSU closed out the scoring in the ninth when Rudick led off with his fourth homer of the season on a 1-0 pitch.

Fein led the Aztecs with a 3-for-5 effort at the plate and two runs scored, tying Rudick for team-high honors, while Jarvis and Carrigg finished with two hits apiece.

Tibbett (3-2) was tagged with the loss after yielding six runs on eight hits and no walks to go with a pair of strikeouts in 3 1/3 innings before giving way to Brown and Christian Winston, respectively. Kohl Simas entered in the eighth and struck out the only two batters he faced.

On the flip side, Cam Walty (2-3) earned the victory after allowing three runs on five hits and two walks against a game-high seven strikeouts in five innings. Cochran collected his fourth save of the year, yielding just two hits besides Rudick’s homer and a walk in the final three frames.

San Diego State returns to “America’s Finest City” for its final scheduled home series of the 2021 campaign next weekend when it battles San José State May 8-9 at Tony Gwynn Stadium.