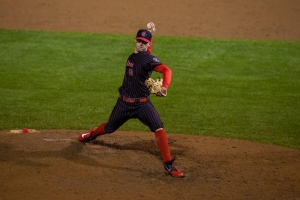 Back-to-back doubles by Julian Escobedo and Casey Schmitt in the top of the first opened the door for Angelo Armenta to drive in the game's first run, scoring Escobedo on a groundout to second base.

The Anteaters later scored five runs in the second inning, using three hits and three walks to take a 5-1 lead.

SDSU immediately answered back with a pair of runs, with Armenta recording an RBI double to centerfield to bring in his second and third RBIs of the night. An inning later, the Aztecs cut the deficit to just one with a Rudick sacrifice fly.

The Aztecs and Anteaters exchanged single runs in the second half of the game, with the Anteaters scoring a run in the fifth and Mike Jarvis hitting an RBI single in the top of the seventh to make it a 6-5 UCI lead.

The Aztecs were unable to overcome multiple one-run deficits despite standout performances out of the bullpen by Jacob Flores and Casey Schmitt. The duo held UCI to just one hit over the game's final three innings, including Schmitt's effort in the bottom of the eighth where the sophomore struck out the side in order.

The Aztecs were hindered by nine walks, a hit by pitch, two wild pitches, and a pair of passed balls.

SDSU begins a series with Air Force on Thursday at 6:00 p.m. The first game of the series will be a continuation of a game on March 2, where the Aztecs currently lead in the top of the second 2-0. Friday will feature a doubleheader beginning at 2:00 p.m., while the series finale is scheduled for Saturday at 1:00 p.m.  ECM Sports may have coverage of Saturday's game; stay tuned for updates.