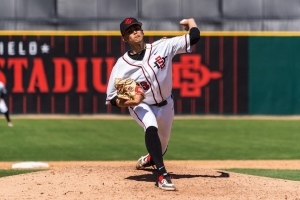 The Aztecs entered the ninth inning with chasing a 5-2 deficit, but after pinch hitter Deron Johnson and designated hitter Joe Fitzhugh drew walks to start the inning, the Aztecs brought the game-tying run to the plate with no outs in the ninth inning.

A pair of fielder's choices gave the Rebels the first two outs of the frame, but Rudick converted after battling through a nine-pitch at-bat and singling to centerfield to score both Mike Jarvis and Fitzhugh. Unfortunately for the Aztecs, Rebels closer Jackson Cofer stopped the late-inning rally, forcing Julian Escobedo to ground out to second base to end the game.

SDSU had a 2-0 lead after a Joe Fitzhugh second-inning RBI single and a Casey Schmitt third-inning RBI base hit. The Rebels made the lead shortlived after a two-run single by Edarian Williams tied the game in the bottom of the third.

UNLV took its first lead of the game in the fifth, as a Bryson Stott solo home run gave the Rebels its first run in a three-run fifth inning.

Justin Goossen-Brown suffered the loss, allowing five runs on eight hits in 6.1 innings pitched. Christian Winston shined out of the Aztec bullpen, posting 1.2 innings of hitless relief and retiring five of the six batters he faced.

Rudick and Angelo Armenta led the Aztecs from the leadoff and cleanup spots, respectively, with both turning in 2-for-4 performances at the plate.