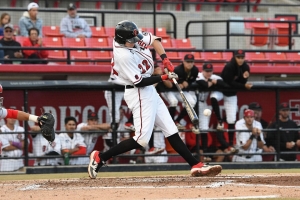 May 24, 2019 (Reno) -  San Diego State suffered a 9-3 loss to UNLV in its first-round Mountain West Championships contest at Peccole Park on Thursday afternoon. SDSU, now 32-24 on the season, will face the loser of No. 1 seed Fresno State and No. 4 seed Nevada at 2:00 p.m. tomorrow in an elimination game.

UNLV posted a five-run second inning featuring a Dillon Johnson grand slam to jump out to a quick 5-0 lead. The Aztecs, meanwhile, ran into some tough luck in both the first and second innings, as a well-hit line drive by Mike Jarvis was caught by Edarian Williams and erased a Matt Rudick leadoff single after Williams doubled Rudick off at second.

An inning later, Ryan Orr hit a line drive with the bases loaded that had an opportunity to be extra-bases down the right-field line, but was caught by Rebel first baseman Austin Pfeifer and turned into a double play with his momentum carrying him towards first base.

The Rebels extended the lead to 7-0 with a Jack Thomas Wold leadoff home run and a Pfeifer RBI single in the top of the fifth.

Mike Jarvis but SDSU on the scoreboard in the sixth, hitting his fifth home run of the season to cut the deficit to 7-1. The Rebels responded with a pair of runs in the seventh after Rebel catcher Jacob Godman hit a 2-RBI single to stretch the lead to 9-1.

The Aztecs did not go down quietly in the ninth as Chad Bible his team-leading seventh home run of the season and Deron Johnson hit a ground-rule double before later scoring on a Jacob Cruce RBI single.

Bible reached base three times in a 2-for-3 day, while Jarvis contributed a 2-for-4 showing at the plate.

Out of the bullpen, Daniel Ritcheson allowed two runs on two hits and three walks in three innings of relief.