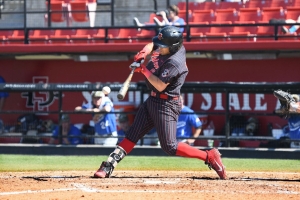 New Mexico opened the game's scoring with a two-run second inning. In the home half of the second, SDSU cut the deficit in half with a Jacob Maekawa RBI ground out scoring Deron Johnson.

The Lobos pulled away from the Aztecs, scoring two in the third, a run in the fifth, and two in the ninth to gain a 7-1 edge.

The Aztecs, however, did not go quietly in the ninth inning. In his last Tony Gwynn Stadium plate appearance, Angelo Armenta drew a leadoff walk before being pinch ran for. Fellow senior Chad Bible then ripped a double into the left-field corner in his final Tony Gwynn Stadium at-bat.

Jacob Cruce drove in both runners on a well-hit RBI single through the middle of the infield to make it a 7-3 deficit. The Aztecs cut the deficit to just three after a Maekawa RBI double, but New Mexico reliever Malachi Emond closed the door after forcing Matt Rudick to ground out in the next at-bat.

Mike Jarvis and Cruce led the Aztecs with both going 2-for-4 at the plate.

In his final Tony Gwynn Stadium appearance, Brad Wegman retired each of the two batters he faced in the eighth inning.

No. 2-seeded San Diego State will face No. 3-seed UNLV on Thursday at 2:00 p.m. in Reno, Nevada for the first round of the Mountain West Championships.

It is the sixth time San Diego State finished second in the conference. Each of the last four Mountain West Tournament Champions have been the No. 2 seed, including three times by SDSU. The Aztecs are 18-4 overall and 11-2 in their last 13 games when playing as the No. 2 seed.