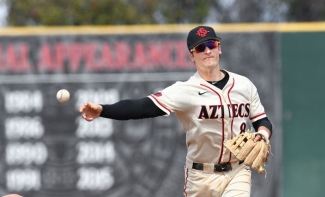 SDSU started its offensively-focused day with a four-run first inning that featured a three-run inside-the-park home run by David Hensley.

After Air Force made the game tighter with a run in the bottom of the first and a run in the bottom of the fourth, SDSU broke things open with a six-run fifth inning to take a 10-2 lead. A pair of freshman hit back-to-back homers in the frame -- both the first of their respective collegiate careers -- as Casey Schmitt hit a two-run shot just before classmate Joe Fitzhugh hit a solo homer to cap SDSU's fifth-inning outburst.

The sixth inning sparked a span of four consecutive scoring innings for the Aztecs, helping put the game out of reach. Schmitt continued his productive day with an RBI double just before fellow freshman Matt Rudick drove in a pair of runs on a 2-RBI single.

Jordan Verdon concluded SDSU's 15-run showing with a solo home run, good for his fourth long ball of the season.

The Falcons posted some late-inning offensive pressure, scoring two runs in the ninth, however, Schmitt posted the final three outs of the game on the mound to seal a 15-11 win for SDSU.

SDSU had four players post three-hit performances, including Hensley and Schmitt, who logged four and three RBIs, respectively, to lead the offense. Eight of nine Aztecs in the starting lineup recorded at least one hit.

On the mound Justin Goossen-Brown posted 4.1 innings in his first weekend start of the year, allowing four earned runs on 11 hits. Adrian Mardueno improved to 4-0 on the year, posting 3.2 innings in relief of Goossen-Brown.