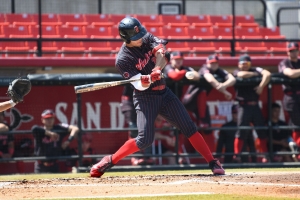 The scoring started early for both sides, as the Aztecs responded to a single unearned Cougar run in the first with a three-run effort in the bottom half of the inning. Matt Rudick and Angelo Armenta both scored on wild pitches and Chad Bible scored Julian Escobedo on a ground out to second base in the first inning.

The Aztecs recorded another three-spot in the third, using Bible's team-leading sixth home run of the season -- a three-run shot to left-center -- extending the lead to 6-2.

Daniel Ritcheson took over on the mound for SDSU in the second and faced some control issues, but settled in nicely after a three-walk second inning. From there, Ritcheson finished his 5.2 innings of work with only one hit and four hits allowed while striking out six to earn his second win of the season.

Deron Johnson led off the bottom of the fourth with a double and later scored on an Escobedo single to stretch the Aztec lead to 7-2. After the Cougars scored in the top of the eighth, SDSU added another three runs in the eighth in thanks to a Casey Schmitt 2-RBI single and a throwing error by Cougar third baseman Brian Hsu.

The Cougars posted a two-run, three-hit ninth inning to bring the score to its final 10-5. BYU's Jarod Lessar was handed the loss, allowing six runs on seven hits over three innings pitched.

Angelo Armenta tied his season-high with three hits in a 3-for-5 showing at the plate. Bible finished the day with four RBIs -- tying his career-high -- while Rudick, Escobedo, and Schmitt all recorded two hits and scored two times each.

Aztec pitching held the Cougars to a  2-for-13 clip with runners in scoring position. SDSU's top four hitters of Rudick, Escobedo, Schmitt, and Armenta combined to go 9-for-19 (.474) with eight runs scored, while every starter in the Aztec lineup recorded at least one hit.

SDSU travels to first-place standing Fresno State this weekend for a series starting Friday night at 6:00 p.m. The winner of the Aztec-Bulldog series will determine first place in the Mountain West heading into the final weekend of the regular season.