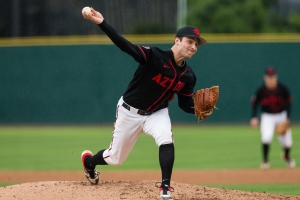 March 17, 2019 (San Diego) - Behind standout performances from sophomores Casey Schmitt and Matt Rudick, the San Diego State baseball team finished a three-game sweep of Seattle after defeating the Redhawks 11-5 on Sunday afternoon at Tony Gwynn Stadium. SDSU, now winners of four straight and six of their last seven, improves to 11-7 while Seattle falls to 4-15.

Schmitt led the Aztecs both on the mound and at the plate, earning his first win of the season throwing five innings while allowing two runs on four hits with three walks and six strikeouts. At the plate, Schmitt finished a triple shy of the cycle, going 4-for-5 with two runs scored and two RBIs.

From the top of the lineup, Rudick finished a home run shy of the cycle in a 3-for-5 day at the plate with a career-high five RBIs.

Schmitt's offensive outburst began in the second inning with a high fly ball finding its way over the left-field wall for the sophomore's second home run of the season.  In the ensuing inning, Seattle took a 2-1 lead with a two-run, two-hit top of the third.

The SDSU bats strung together a four-run, five-hit fourth inning, kick-started by a Brian Leonhardt leadoff triple. Leonhardt then scored on a Schmitt single, before Deron Johnson brought home Schmitt on a single through the right side of the infield. Rudick capped the four-run fourth with a two-run double scoring both Johnson and Jaden Fein.

With SDSU holding on to a slim 6-5 lead heading to the bottom of the eighth, the Aztecs put up another big inning with a five-run, four-hit eighth. Fein, Johnson, and Devyn Lopez all reached base to start the eighth before Rudick cleared the bases with a 3-RBI triple to make it a 9-5 Aztec lead.

In the next at-bat, Rudick scored on a Julian Escobedo RBI double. Escobedo eventually came around to score on a Leonhardt sacrifice fly to bring the score to its final 11-5.

In addition to Rudick and Schmitt, Escobedo posted a multi-hit performance, going 3-for-5 with an RBI and a run scored, while Leonhardt went 2-for-4 with a run scored and two RBIs.

Following Schmitt in relief was Leonhardt, who finished his day on the mound with two innings of relief with two hits and one run allowed. After Valhalla grad Casey O'Sullivan pitched the eighth, Daniel Ritcheson posted a hitless ninth to finish the game.