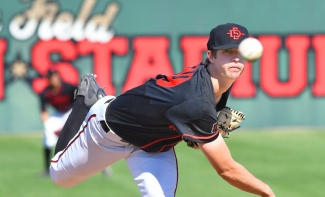 Hill threw 6.2 innings of shutout baseball against Air Force on Sunday, taking a no-hitter bid into the sixth inning before allowing his first and only hit of his outing. Hill tallied eight strikeouts against the Falcons to collect his third win of the season.

The transfer from Santa Rosa JC has not allowed an earned run in 12.2 innings pitched in Mountain West play this year. The Petaluma, Calif. native has stuck out 15 batters in conference play this year while only allowing six hits and three walks.

Hill has been one of the best pitchers in the conference through the first four weeks of the 2018 season, owning the second-best ERA (1.25), second most strikeouts (30), and second most victories (3). Hill has not allowed an earned run in three of his four starts this season and has allowed just two extra-base hits in 21.2 innings pitched, with both being doubles.

After a midweek contest at San Diego for the Aztecs on Tuesday night, Hill is set to make a weekend start this week at Cal Poly, where the Aztecs take on the Mustangs for a three-game series beginning March 16.