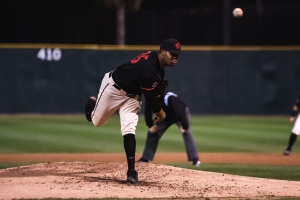 Falcons strand game-tying run at third base in the ninth

April 18, 2019 (San Diego) - In a game resumed from a snowy postponement in Colorado Springs on March 2, the San Diego State baseball team finished its game against Air Force with a 4-3 win on Thursday night at Tony Gwynn Stadium. SDSU improves its record to 22-16 (8-6 Mountain West), while Air Force drops to 16-20 (6-10 MW).

In Colorado Springs on March 2, SDSU set the tone early in the first with a double to right field by lead-off batter Matt Rudick. Angelo Armenta then hit an RBI single to center field for Rudick to score, putting the Aztecs in the lead 1-0. The Aztecs added another run in the second, with Deron Johnson doubling to bring home Casey Schmitt to make it a 2-0 lead before snow halted the game from being continued.

1,129 miles away and 47 days later, Aaron Eden came into the game with one out and two runners on in the bottom of the second. Eden stranded both of those inherited runners forcing Tommy Gillman to fly out to right field and a 1-3 groundout against Cole Blatford.

Aztecs got their Thursday-night scoring started n the top of the fifth, with Chad Bible and Devyn Lopez scoring on a double by Armenta to make it a 4-0 Aztec advantage. Air Force responded with their first run on an RBI single to shortstop by Nic Ready in the bottom of the fifth.

The Falcons made things interesting heading into the ninth inning, as the Aztecs started the inning off with a hit by pitch, a failed pickoff attempt allowing Gillman to reach second, and a Daniel Jones walk. Alexander Pup hit an RBI single to right field, scoring Gillman to narrow the Aztec lead to 4-2. After a passed ball brought the Falcons within one, Casey Schmitt stranded the game-tying run at third and the game-winning run at second after striking out Falcon pinch hitter Ben Hauser.

Armenta recorded a season-high three RBIs for the second consecutive game, finishing the game 2-for-4, while Johnson also posted a 2-for-4 performance with a pair of doubles.

Eden (3-0) earned the win for the Aztecs, while Air Force’s Matt Hargreaves (2-3) took the loss after surrendering two runs and four hits in his start on March 2. Schmitt earned his fourth save of the year, recording two strikeouts in 1.0 shutout inning of relief.

San Diego State hosts Air Force for a doubleheader tomorrow starting at 2:00 p.m. The second game of tomorrow's doubleheader, starting at 6:00 p.m. (or later, dependent on the length of the first game) will air on the Mountain West Network.