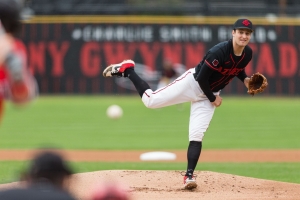 Casey Schmitt records save after three innings of shut out, one-hit relief

April 9, 2019 (San Diego) - The San Diego State baseball team defeated Loyola Marymount 4-2 on Tuesday night at Tony Gwynn Stadium. The Aztecs, now winners of five of their last seven, improve to 19-14 on the year while the Lions fall to 20-12.

Both Aaron Eden and Casey Schmitt shined on the mound for the Aztecs, with Eden starting on the mound and earning his second win of the season after six innings with five hits and one earned run allowed. Schmitt, making his first relief appearance since March 10, kept the Lions quiet, earning his third save of the year with three innings pitched, three strikeouts, and one hit.

The Aztecs were quick to score the game's first runs, as Matt Rudick posted a lead-off double in the bottom of the first and later scored on a one-out Angelo Armenta single to centerfield. Brian Leonhardt hit the first of his two doubles later in the frame, allowing Schmitt to score on a well-hit line drive to right field.

After scoring an unearned run in the third, the Lions were threatening after a pair of Aztec errors loaded the bases for LMU. Fortunately for Eden, the freshman was able to work his way out of it, forcing LMU's Cooper Uhl into a 4-6-3 inning-ending double play to preserve the 3-1 lead.

The Lions cut the deficit to 3-2, using Trevin Esquerra's 11th home run of the season for a single run in the sixth inning.

The Aztecs added an insurance run in the eighth, as base hits by Ryan Orr and Devyn Lopez and a walk by Matt Rudick loaded the bases. Julian Escobedo drew a bases-loaded walk in a five-pitch at bat to bring home Orr before the Lions got out of the inning with limited damage after Schmitt hit into a fielder's choice to shortstop.

Armenta, Leonhardt, and Orr each went 2-for-4 at the plate.

LMU's Mark Finkelnburg was handed the loss after recording just one out and surrendering three runs -- all earned -- on three hits and a walk.